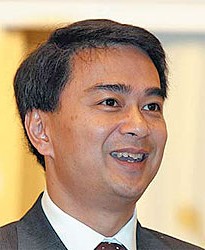 The ongoing political protests in Thailand and the hasty cancellation of the 14th Asean economic summit that saw 14 heads of state hurriedly evacuated from a Pattaya hotel rooftop by helicopter will have a long-lasting affect on Thailand. After only four months in office Prime Minister Abhisit¬† Veijajiva already looks like a dead man walking […]

The head of Thailand’s tourism promotion authority has predicted the bloody and violent clashes between police and anti-government People’s Alliance for Democracy (PAD) protesters last Monday (Oct. 7, 2008) will have an insignificant effect on the country‚Äôs tourism.

Thailand tourism in crisis as protesters die in ‚Äòbloody Bangkok‚Äô

While the head of the Tourism Authority of Thailand was describing Thailand as a safe, desirable and peaceful country, and explaining that the protests were evidence of a democracy in action, peaceful and localised, people were being killed, having limbs blown, and home-made bombs exploding as hundreds of ant-riot police attempted to clear a way into Parliament House, firing up to 50 rounds of CS (tear) gas into thousands of yellow-shirted PAD protesters who had blockaded and fortified the legislature with barbed wire and tyre blockades.