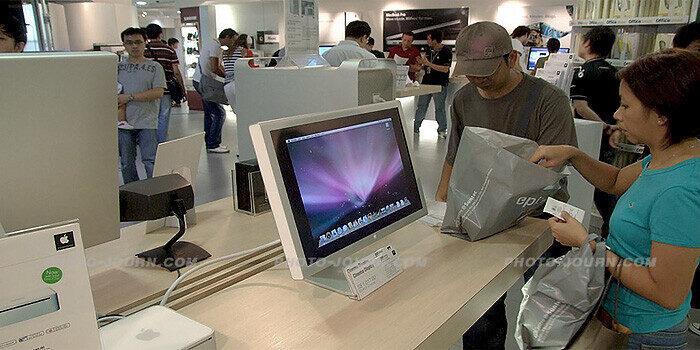 If ever a reason was needed to buy a Macintosh computer Apple’s latest release of its operating system (OS), code named Leopard, provides plenty of incentive.

According to Apple more than two million copies of Leopard were sold in the first weekend following its release and users are finding it lives up to all of the hype that preceded its release.

OSX 10.5, as it is formally known, is the sixth release of Macintosh OS 10 in the last six years and continues the use of “large cat” monikers by Apple to name its operating system. Of the four species that form the large cat genus only the lion has yet been used.

The latest inculcation of the Macintosh OS is priced the same as its Tiger, Panther, Jaguar and Puma predecessors at US$129 for a single dual layer DVD and US$0.95 less than the original OSX 10.0 Cheetah introduced in 2001.

While there are a string of reports of some users experiencing difficulties installing the update, most of these have been found to be caused by third party utilities and applications that fail to conform to Apple’s programming guidelines.

My personal experience with the installation using the “archive and install” facility was a totally pain free one, while the speed increases Leopard delivers well and truly compensates for the time it took in ensuring my computer was ready for the install and the time it took to perform.

Though OSX 10.5 is not a fatal body-blow to Microsoft’s Windows Vista operating system, it is sure to result in increased sales of Macintosh’s, at least until the Redmond, California developers manage to catchup with some of the innovative and productivity increasing features it packs.

While Vista has provided PC users with a poor-man’s version of what Mac users have had for many years, Leopard totally redefines the desktop workspace. In fact it’s hard to imagine anyone opting for a Vista-based personal computer once they have seen what can be done with the new Macintosh OS.

While some of the new features such as transparent menu bars and the 3D dock are purely “eye candy,” others such as Cover Flow, Quick Look, Stacks, Spaces, and Time Machine revolutionise the desktop and provide greatly improved productivity and document security capabilities.

The impressive new look starts with the Finder which now has a cool new iTunes-style look and feel.

In addition to the traditional icon, list and column views, a new option called Cover Flow splits the finder window horizontally to display thumbnail images of a folder contents above a column list of the contents.

High definition thumbnails of PDF documents, movie clips, JPEG files, Word or Excel files are displayed in the picture area and can be viewed in a similar manner to flipping through the pages of a book.

Cover Flow allows a wide range of files, including the contents of multi-page PDF documents to viewed from within the Finder. Movies can also be played without the need to open an application to run them.

With a simple press of the space bar Quick Look allows up to full screen versions of JPEG, text, Excel, PDF, Word, movie and other files to be opened and viewed without the need to launch the application that created them.

In the case of multi-page PDF Pages or Word documents it is even possible to scroll through the contents of each page.

This is a great productivity boosting tool as it is no longer necessary to open an application to view the contents of say a Word file to refresh your memory when you are working on email or to quickly check a reference.

Unfortunately Cover Flow does not allow you to open a preview of a word or PDF document, select a portion of the text for copying and paste it into a email.

It also does not display a 100 per cent true view of text documents and users will notice error in formatting that do not exist in the original.

What it does facilitate quiet well though is the viewing of multiple documents that may have similar names so that when you double click on the thumbnail in Quick Look to open the file you are able to go directly to the file you want.

For many people desktop clutter is a common occurrence. Most people have more than one application at a time open.

Now when you see your boss approaching while you are browsing through your MySpace or Facebook pages a simple mouse click or ctrl-arrow combination will quickly return the spreadsheet or word processing document to your screen that you should be working on.

Apple has also overhauled its Mail program. In addition to being able to now apply templates incorporating drag-and-drop photo placements, it is now no longer necessary to email yourself reminder notes.

Reminders can be created from within the Mail program and stay in a separate section of the Mail application desktop.

Also providing productivity gains is the new Stacks function. Stacks allows folders to be placed in (on?) a section of the application Dock and provides either a fanned or grid display of the folders contents with a single mouse click.

A required file or folder can then be opened with a single mouse click.

While handy in the current implementation, it would be even more useful if the stacking functionality could be applied to folders placed anywhere, rather than limited to just those placed in (on?) the Dock.

It would also be considerably more beneficial if the pop-up feature of stacks was able to be applied to folders inside the main Stack folder.

As it is presently, clicking on a folder in a stack opened in either the fanned or grid display open that folder on the desktop.

While Apple has given the fanning capability of Stacks considerable emphasis, fanning only works if the Dock is placed horizontally along the bottom of the screen.

People who spend considerable time with their web browser open want as much desktop height as possible and generally place the Dock vertically. Unfortunately in the current implementation the fanning capability is not available.

Not withstanding this the grid display does save the need to search for a required file in the Finder.

Upgrade your hardware or stick with Tiger

Also much vaunted by Apple in the lead up to the release of OSX 10.5 has been Time Machine.

While H.G. Wells’ Time Machine had the capability to go into the future or the past, Apple’s implementation can only backwards – which is what most people tend to need.

Despite all of the warnings and numerous magazine and newspaper articles that have been written advising people to backup their data, very few people maintain a strict archiving regime.

Apple’s Time Machine provides the easiest possible solution to this. Simply connect a FireWire or USB hard disk to your computer, activate Time Machine and the contents of your hard disk are automatically copied to the external drive.

Once the initial backup is complete Time Machine will automatically back up your data every hour. Should the need arise you can quickly and easily locate and restore a previous version of a missing or damaged file or folder from the backed-up version.

The new Quick Look and Cover Flow features, as well as Apple Spotlight file searching tool all work with files stored on the Time Machine hard disk allowing you to easily locate the file you are looking for and then confirm you have in fact found the correct version before restoring it to your computer.

To gain the maximum benefit from Time Machine a hard drive needs to be connected to your Macintosh all of the time. For some this will be a drawback.

In addition, Time Machine will not recognise MS-DOS Fat 32 formatted hard disks preventing users from connecting their archived disks to a PC.

At the time of writing I have not tested the Time Machine function so can not give any report on what level of security is used to protect the archived files should the hard disk be lost or stolen.

Parents can restrict websites by name, authorise only certain websites as accessible, limit the number of hours their children can use the computer and even limit who their kids exchange emails and iChat sessions with.

If their kids try and connect with unauthorised email or iChat accounts the computer can be set up to automatically forward an email advising parents.

The beefier parental controls can also keep a log of all websites visited and all iChat sessions held.

The new level of parental controls also provides a system administrator or employer with greater control.

If an employer feels that employees are spending to much time accessing their MySpace or Facebook sites parental controls could be used to block access to these sites.

While these are just a few of the 300 new enhancements and features included in OSX 10.5 it should be enough to leave home and business users with little doubt that those clever programmers at Cupertino have again set new benchmarks for personal computer operating systems.

It should at the very least cause anyone who is in the market for a new personal computer for either home or business use to drop in to their local Apple reseller prior to making a purchasing decision.

While some PC writers have been quick to point out some flaws with Leopard, such as the new transparent menu bars and information panes being a little difficult to use if sitting on top of a dark desktop picture, the innovations incorporated in the new OS far outweigh the negative.

No one would say that Leopard is the perfect operating system. Such a beast will never be developed.

What it is though is significant step forward and a continuation of the Apple heritage that has always seen the Macintosh boast a more intuitive and practical operating system than its rivals.

It’s hard to imagine any Macintosh user whose machine meets the minimum requirements not upgrading to the new OS.