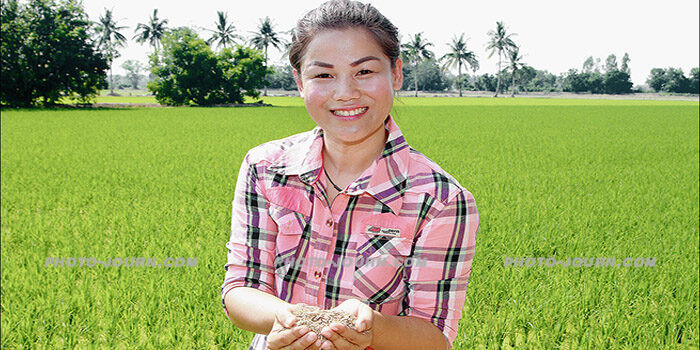 Thailand rice farmers earn almost 55 per cent less than their counterparts in Myanmar and about half that earned by Vietnamese rice farmers, making them amongst the lowest earning rice farmers in Asean.

Reliance on poor quality fertilisers, poor crop rotation practices, and a “this is the way my father grew rice and his father before him” attitude all largely share the blame.

The result is production costs for Thailand rice farmers being up to 139 per cent more than those in Vietnam and 37 per cent higher than for rice farmers in Myanmar.

Coupled with acute water shortages brought about by a destructive drought cutting a swathe through central and northern Thailand causing a 4.2 million tonne year-on-year (YoY) reduction in this year’s off-season rice crop and it is a recipe for disaster for Thailand’s estimated one million rice farmers and the Thai economy.

Attempting to change this is a 32-year-old accounting graduate in the central Thailand province of Chai Nat, Anupa Panyadilok.

Unlike many of her contemporaries who headed to the cities to look for better paying jobs after graduation, Ms Panyadilok returned to her family farm and began analysing the cost of traditional rice production and alternative methods capable of generating higher yields and greater cash returns.

Quickly realising that the constant use of traditional fertilisers left large concentrations of salt in the soil which impedes rice growth, while recognising the increasing global demand for chemical-free (organic) rice, Ms Panyadilok set out to find solutions to both problems.

In the five years since she has succeeded in developing answers to both issues, resulting in a 40 per cent reduction in production costs and a 20 per cent increase in harvest yield.

Along the way she has also perfected a simple method of alternate wetting and drying (AWD) cultivation that dramatically reduces the amount of water needed to grow a bountiful rice crop.

Traditional ponding rice cultivation requires an average of 1,432 litres (about 378 gal) of evapotranspiration (evaporated & transpiration) water alone (excluding seepage and percolation) to produce 1 kg (2.2lbs) of rough (unmilled) rice. About the same as the global-average required for wheat, but more than for maize and barley.

Any reduction in water is a boon for rice farmers in a country where rice fields total some 11.2 million hectares (27.678 mln acres) and where water needs to be pumped by diesel-powered water pumps from bores or irrigation channels.

While the total amount of rice paddy in Ms Panyadilok’s Chai Nat Province, as well as the neighbouring provinces of Lopburi, Sing Buri, and Ang Thong have fallen to a 20-year low (there was a 72 per cent YoY reduction in land use for rice this year), Ms Panyadilok and the 10,000 or so people who comprise her “young farmers network” are enjoying a bountiful harvest.

Best of all, the now tried and proven methods require just one day of training to learn, and utilise inexpensive PVC plumbing pipe for the AWD cultivation method.

With young rice farmers from outside her own province expressing interest in AWD cultivation and organic rice farming, an online network ensures that any knowledge or experience gained is rapidly shared amongst others with a similar interest.

Five centimetres (2 inches) of water is stored in the paddy field to soften the soil and 15-20 days after transplanting rice seedlings the water level is increased to between 7cm-10cm (2.75-4 inches).

Only two weeks ago on his weekly Returning Happiness to the the People programme broadcast on television nationwide, Thailand Prime Minister General Prayut Chan-o-cha urged people to make better use of water.

The PM explained that in a normal year Thailand can only irrigate about 40 per cent or some 23.520 million hectares (58.119 mln acres) of its total 51.2 million hectares (126.518 mln acres) of farmland. The long-lasting drought, he said, meant that meeting this demand was becoming increasingly difficult. He also urged farmers to use less chemical fertilisers.

Since late last year farmers who rely on irrigated water supplies have been told not to grow an off-season rice crop due to reservoir levels leading into the dry season being at a 15-year low.

While water, or the lack thereof is one major expense for Thailand rice farmers, pesticides and fertilisers are the other.

As part of an overall push by Chai Nat Provincial Agriculture Office (PAO) to turn the entire province into one of the largest organic rice growing regions in Thailand, Ms Panyadilok worked with NSTDA to develop an organic pesticide utilising corn kernels that have been exposed to an enzyme which creates a mouldy, fungus growth.

The corn, which literally costs pennies (Bt10 / $0.30) per bag, is placed inside horizontally mounted pieces of PVC pipe and spread throughout the rice field at a rate of 44 dispensing stations per one hectare (108 per acre), with wind dispersing the corn into the water.

The enzymes combat ragged stunt virus and grassy stunt virus carried by brown planthopper (BPH) (Nilaparvata lugens), a winged insect that can decimate healthy rice paddies, while the corn attracts birds which in turn feed on the insects.

Turning her back on chemical fertilisers, which over time lowers the efficiency of rice fields, Ms Panyadilok found that Azolla, a common water fern able to be grown in large volumes in tanks of water and rich in proteins, amino acids, vitamins and minerals was a more effective fertiliser than chemicals.

In addition to presenting no health hazard to farmers, Azolla adds nitrogen to the soil, while at the same time removing phosphates, which can leach into and contaminate groundwater supplies.

Not only have the methods developed by Ms Panyadilok enabled her and those in her “young farmers network” to grow bountiful crops when others who rely on traditional high-water use rice cultivation methods could not, it has also allowed them to tap into the rapidly expanding organic rice market.

In Chai Nat province more than 76 per cent of the available farmland or some 157,666 ha (389,600 acre) is devoted to rice farming, with the locally created Nang Lue – Tha Chai rice grain recognised as a sturdy strain that farmers in the province sell to other rice farmers in more 40 of Thailand’s 76 provinces.

According to Ms Panyadilok farmers following her methods and growing organic rice are able to achieve a price of Bt14,000 ($416.29) per tonne for unhusked rice, double the Bt7,000 ($208.15) that rice grown with expensive and dangerous pesticides and fertilisers can get.

More importantly, with the supply of rice seeds to rice farmers throughout Thailand representing a major market for rice grown in the region, farmers who grow rice for seed stock are able to command Bt100 ($3.89) per kilogram ($1.77 per 1 lb), compared to Bt10 ($0.30) per kilogram for non-organic seed.

That the young rice farmer has as yet not received any recognition of her achievements, or government assistance with her informal “young farmers network”, is of little consequence she says.

“Every day the number of people who hear of what we are doing here is expanding. Slowly the parents are starting to listen to their children and understand that the methods used in the past are not necessarily the best.

“I’m happy every time I hear through my network that somewhere in Thailand another rice farming family has decided to give my methods a try and even more happier when I get emails telling me of the savings, larger crops, and better incomes.

“Thailand has always grown the world’s best rice; now we can grow healthier rice at a lower cost and protect our environment [rice paddies] as well”, she said.

With more than 42 per cent of the Thai labour force employed in the agricultural sector and farm income from major crops in 2014 falling 4.55 per cent on the back of a 6.2 per cent YoY fall in farm crop prices, the efforts of Ms Panyadilok and the Chai Nat PAO are a significant step in improving the low returns Thai rice farmers currently receive for their toil.

An earlier version of this story was published in The Establishment Post, May 27, 2015 as Thai rice farmers income boosted from organic, AWD cultivation