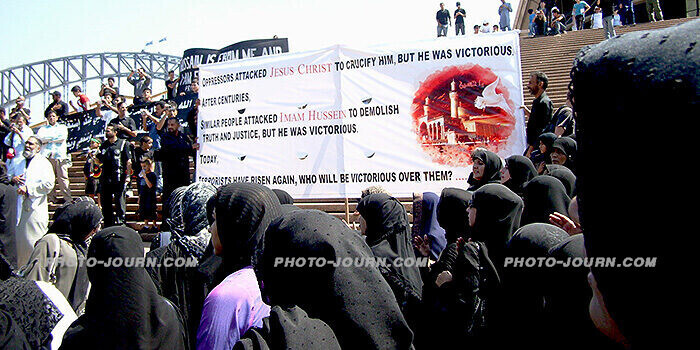 Eleven years after being elected to the Australian parliament on an anti-Asian migration platform, Australian politician and former take away food shop operator, Pauline Hanson is making a fresh bid for parliament, this time on a platform of banning Muslim migration.

Ramping up her run for a Queensland Senate seat in the federal election due to be called later this year, the 53-year-old former take away food shop operator claimed, “mainstream Australians are terrified that we’re going down the European track, with problems with Muslims. They are very frightened their culture and way of life is being taken away from them.”

While the claim might sound outrageously discriminatory, a poll conducted online by the Channel 9 television networks ninemsn.com on August 12 found the majority of Australians agree with her. Of 80,149 respondents, 71 per cent indicated that they agreed with Pauline Hanson on (banning) Muslim immigration.

Muslims comprise just 1.5 per cent of the Australian population, yet the poll follows a similar one conducted on the same website on February 16 this year in which 75 per cent of 41,307 respondents agreed that the Australian Government should cap immigration for particular religions.

In her maiden speech to parliament on September 10, 1996, Ms Hanson achieved national and international notoriety when she claimed Australia was, “in danger of being swamped by Asians” due to high immigration and the policy of multiculturalism.

At the time Ms Hanson claimed, “they have their own culture and religion, form ghettos, and do not assimilate.”

She also denounced the “privileges Aboriginals enjoy over other Australians”, advocated the return of high-tariff protectionism and generally decried many other aspects of economic rationalism and what she perceived to be ‘political correctness’.

Following her maiden speech both of Australia’s major political parties moved rapidly to distance themselves from her comments, while sections of the Australian media labeled her xenophobic, a term she didn’t understand.

Her comments also caused outrage throughout Asia and had many Asian leaders questioning Australia’s racial views.

In calling for a total moratorium on Muslim immigration, Ms Hanson said “people have a right to be very concerned about this because of the terrorist attacks that have happened throughout the world”.

Since calling for the moratorium on Muslim migration, she said she has “received many calls from people all over Australia concerned about the effect of Islam”, and is “attracting thousands of backers.

“I think that we need to look at getting out of the 1951 convention of refugees, and not being forced into taking refugees in this country that bring in diseases, who are incompatible with our lifestyle.”

“Maybe we should look at the female genital mutilation that happens to young girls in this country… if people want to live by these ways then go back to the Muslim countries”, she said.

Ms Hanson also criticised the Australian Government over a A$29 million donation to the Indonesian Government to fund Islamic schools, claiming “ordinary Australians are treated with contempt yet again by the Howard Government.

“Australia cannot expect to buy off terrorists by pandering to them. Militant Islamists keep reminding us that they will destroy us and our way of life, yet those in Canberra seem to suffer from collective deafness. The only way for Australia to stop ending up like the UK is to halt further Muslim immigration.

“Labor and Liberal have sold out mainstream Australians and they don’t want to make Muslims, refugees, and multiculturalism an election issue. But I have news for them, I will”, Ms Hanson said.

To further her bid she has applied to register the ‘Pauline’s United Australia Party’, which would result in her being grouped with other Australian political parties on the election paper. This would give her a better chance at scoring the 4 per cent of the primary vote necessary to receive election funding of A$2.05 for each vote she attracts.

Despite the prospect of receiving hundreds of thousands of dollars in public funds, Ms Hanson has denied suggestions her latest move was motivated by money.

On her web page Ms Hanson, who in July 2006 was named by the influential The Bulletin Magazine in its list of 100 Most Influential Australian’s, claims, “we have a unique identity and culture, shaped not only by Western tradition and our Anglo-Celtic heritage, but also by the nation-building efforts of many generations of hard-working Australians.

“Our immigration policy should therefore be coherent with sustaining our own national identity and culture”.

While claiming Australia is “one of the most tolerant and inclusive nations in the world”, she goes on to say, “proponents of high immigration and multiculturalism are effectively trying to abolish Australian nationhood. At some point we must be allowed to exercise our democratic right to choose who can live amongst us”.

Ms Hanson was elected to parliament as an independent MP for the Queensland seat of Oxley at the 1996 election after being disendorsed as a Liberal candidate because of her strong views on race and immigration.

Ms Hanson’s racial views drew broad international criticism, but her One Nation party briefly enjoyed strong support in Australia on issues such as immigration and trade protectionism, before she lost her seat in 1998.

She was jailed for three months in 2003 for fraudulently spending electoral funds before the judgment was overturned.

There is little doubt that Ms Hanson’s comments will again cause confusion in the region and result in Australian’s outside of their country being questioned on their country’s level of racial and religious tolerance.

If the sad fact be truly known though, racial and religious intolerance are matters that just bubble under the surface for a significant portion of the Australian population. Like a festering sore it often only needs a minor scratch before the rottenness oozes through to the surface.

Over recent years there has been a number of serious incidents of public brawling based on ethnic and religious differences, while more minor, but no less serious attacks on people due to their religion or ethnicity are not uncommon.

The governments habit of grouping immigrants from one ethnic group or nationality all together, rather than interspersed throughout the community is seeing increasing resistance as these “immigrant communities” continue to blossom in size, while the lack of fundamental English-language skills among the majority of new arrivals is stoking fears of a lack of homogeneity occurring.