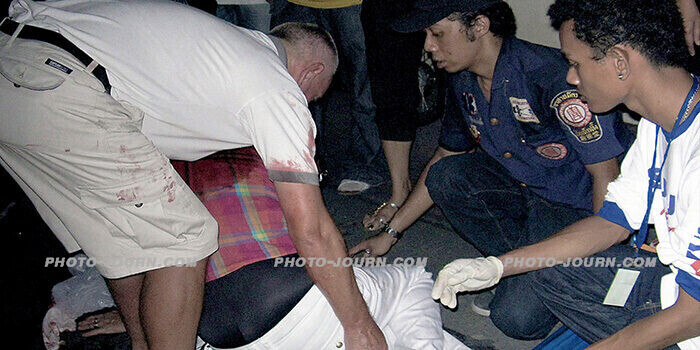 Lydia Riach, a middle-aged Scottish woman, is fighting for her life in a Bangkok hospital, the victim of a bag-snatch theft that went horribly wrong.

Lydia, from Inverness, Scotland, was walking with her husband, Douglas Riach down a well trafficked laneway in central Bangkok on Saturday night between Soi Sukhumvit 20 and Soi Sukhumvit 22 when two men on a motorbike drove passed and stole her handbag.

According to Douglas, Lydia had the bag around her neck as well as over her shoulder and the force of the theft sent her spinning into the roadway fracturing her skull in multiple places.

Doctors at Bangkok Police Hospital performed emergency brain surgery on Lydia on Saturday night following the attack, but have told Douglas that his wife is unlikely to awaken from the coma she is currently in.

The doctors have said her skull was fractured externally in two places as well as internally. She was bleeding from the ears and by the time we got to the hospital there was fragments of bone coming out of her ears.

“She’s currently in a coma and we’ve been trying to talk to her but now she only has one eye open and is not responding to us or bright lights. The doctors have said they don’t think she will last a week though”, a distressed Douglas said.

Family relatives have started arriving in Bangkok, with Douglas’ brother flying in on Monday night and the couples two children expected on Tuesday or Wednesday.

Douglas has been resident in Bangkok for about two years where he works as a consultant for Infinity Financial Solutions, and Lydia joined him less than a year ago and has been actively involved in assisting underprivileged children since.

Friends at The Twenty Two Scottish Bar in Soi Sukhumvit 22 where the two were heading for a game of dominoes when the attack took place were shocked at news of the assault.

This is not a bad part of Bangkok, but there is no denying that these sorts of assaults are on the increase as the economic crisis continues to worsen, one patron said.