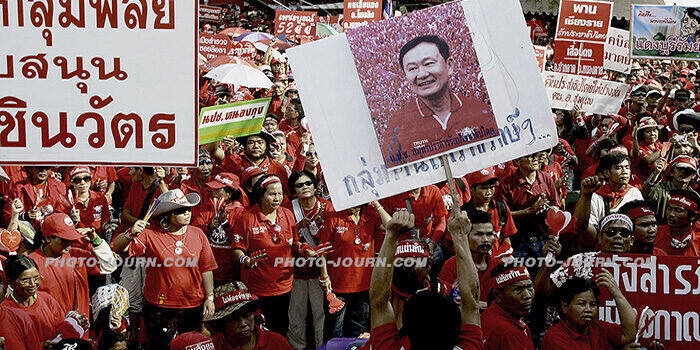 The mass rally saw supporters of the United Front for Democracy against Dictatorship (UDD), now commonly referred to as the red shirts‚ due to the colour of their clothing, travel from the farthest reaches of the kingdom in what was billed by many as D-Day, after months of smaller rallies

The protesters first massed in front of Thailand Government House before an estimated 60,000 of them headed to the nearby residence of revered former prime minister and current Privy Council President General Prem Tinsulanonda and broke through a large police cordon to lay siege to the compound.

The protesters then demanded the current government headed by England-born and educated Abhisit Veijajiva and three privy council members, including General Prem, resign without any condition.

The protesters also called for Thailand to be governed under the constitutional monarchy and by international standards, with a person who abides by democratic principles and is accepted by society allowed to take responsibility.

General Tinsulanonda and the privy councillors have been targeted by the red shirts after fugitive former prime minister Thaksin Shinawatra named them as being masterminds of events leading to the 2006 military coup d’état that forced his elected government from office.

Mr Shinawatra was elected for a second term as prime minister in February 2005 in a landslide victory which saw the largest voter turn-out in Thailand’s history, but deposed by a military coup d’état in September 2006 while he was in the US.

The UDD has close links to Thaksin, who fled Thailand last year while on bail prior to being convicted in absentia of a corruption charge stemming from land purchased by his now former wife.

Over the last few months Mr Shinawatra, who was born in the Northern Thailand province of Chiang Mai and who has a large following in Thailand’s rural north, has constantly infuriated and frustrated the Bangkok establishment and elite by moving from one country to another, while making dozens of video and telephone calls to rallies of his supporters.

Attempts by the Government to disrupt his telephone calls and block his video calls have largely failed, with the former telecommunications industry tycoon and billionaire constantly making the current government appear inept in their attempts.

For the last few weeks PM Veijajiva and his Democrat Party government have largely dismissed the rallies by the pro-democracy UDD as being little more than an irritation, while at the same time desperately trying to coerce countries which Mr Shinawatra has used as a base for his video calls to extradite him, despite Thailand not having formal extradition agreements with most of them.

Between 4.00 and 4.30am alone more than 150 buses and coaches arrived at the Government House assembly area, sending a clear message to PM Veijajiva that Thailand is now divided and those who live outside of Bangkok are not pleased with his governments policies, which tend to favour the Bangkok establishment and elite.

Prior to the rally members of the government had predicted as few as 30,000 people would attend but by 6.00am this figure was well and truly exceeded as convoys of buses converged on the area surrounding Government House‚ with many having taken more than 12-hours to get there.

The Government, some segments of the media, and the so-called People’s Alliance for Democracy (PAD) movement, which last year seized control of both Bangkok airports and engaged in violent clashes with police and anti-PAD protesters, try to paint the red shirts as uneducated, working-class poor from Thailand’s rural provinces.

Today’s turn-out shattered this misnomer with protesters comprising the young, the old, the firm, the frail, Buddhist monks, current and retired university lecturers, school teachers, civil servants, and small and medium sized business owners, as well as the rural, working-class poor who benefited most from the policies of former prime minister Thaksin.

Rejecting the call by protesters for him to resign and call fresh elections, PM Veijajiva said his government also wanted to advance democracy but this had to happen in a peaceful manner via political reform.

While stating the protesters had a right to rally, PM Veijajiva, whose Democrat Party formed a government last December after the Thailand’s Constitutional Court disbanded the then ruling People’s Power Party (PPP) and two smaller political parties who formed the coalition government, said, we will not respond to threats of violence.”

This most recent round of protests is expected to do little for Thailand’s tourism industry, which has suffered severely on the back of last years protests by the PAD which stranded hundreds of thousands of tourists when Bangkok and regional airports were closed amidst violent street protests and images of yellow-shirted protesters shooting at opponents from the back of pick-up trucks.