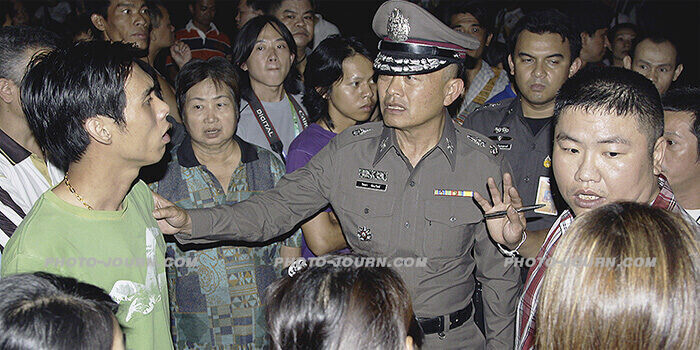 Bangkok’s notorious nightlife district of Patpong was turned into a battle ground last night (May 6, 2009) as hundreds of night-market traders rioted against Thai police.

The angry scene erupted when Thai police and government officers moved into the well known entertainment and night market area in search of counterfeit goods and began impounding knock-off products.

Hundreds of holidaymakers shopping in the popular night market were sent fleeing as police fired warning shots into the air during a running battle with vendors angry at having counterfeit goods confiscated.

The rioting continued across busy Surawongse Road into the forecourt of the four-star Montien Hotel where police were subjected to a barrage of bottles thrown by the traders trying to retrieve their goods.

Guests at the luxurious hotel were forced to seek shelter inside the hotel and were unable to leave or enter for over an hour as the battle raged-on outside the entrance.

The angry traders slashed the tyres and broke the windscreen and side windows of a number of vehicles during the rioting, leaving the forecourt and entrance littered with broken glass and debris.

The crackdown on counterfeit goods comes less than a week after the US federal administration said it would keep Thailand on a priority watch list of what it considers a “dirty dozen” nations that have failed to crack down on copyright and patent violations.

The annual report by the US Trade Representative last week noted that Thailand has not made sufficient progress’ in combatting various kinds of intellectual property rights (IPR) offences.

The Patpong Road area was one of five Bangkok landmarks specifically highlighted in the report, with the others being the giant Mahboonkrong (MBK) shopping centre, the Pantip Plaza technology mall, Klong Thom and what is termed the upper area of Sukhumvit Road.

Following the announcement by the US last week, Thailand Prime Minister Abhisit Vejjajiva acknowledged his country has not effectively dealt with intellectual property rights violations and pledged the government would work harder to address the issues and lobby Washington to upgrade Thailand’s status.