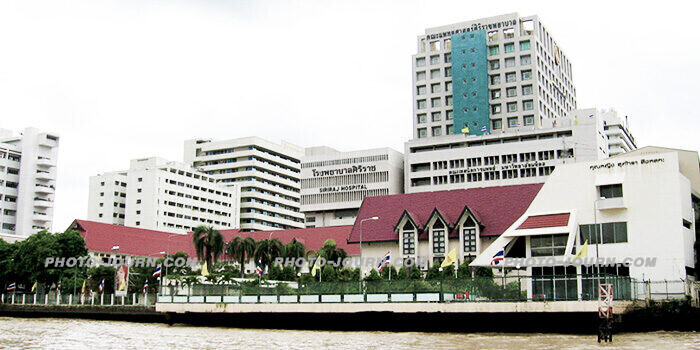 Most people try to stay away from hospitals when they are on holidays, but for some a visit to Siriraj Hospital, Bangkok’s largest and oldest public hospital, is a must.

While not as well known as the War Remnants Museum in Ho Chi Minh City (formerly the Museum of American War Crimes), the Kigali (genocide) Memorial Centre, or the Cambodian Cultural Museum and Killing Fields Memorial, Siriraj Hospital is home to six individual medical science museums tracing the annals of medical science that some people find too irresistible to pass up.

Although the six individual medical science museums were all grouped under the single Siriraj Medical Museum name in 2004, they still remain true to their former single identities and areas of specialty.

The Ellis Pathological Museum traces pathology in Thailand since its foundation in the 1920’s through to today. At this Bangkok city museum, you will see a unique collection of pathological specimens of once common, but currently controlled, tropical diseases such as systemic amebiasis, typhoid, diphtheria, and military tuberculosis.

More confronting are the neat orderly rows of large glass jars containing babies born with a range of ailments, including hydrocephalus, cyclopia, and gastroschisis, as well as conjoined twins.

The most famous conjoined twins in history were Chang and Eng Bunker, who toured with P.T. Barnum’s circus for many years in the 1800s. Born in Thailand they were billed as the Siamese Twins – a term that came to be used as a synonym for conjoined twins.

The Bangkok Parasitology Museum displays a large collection of important parasites, including exhibitions of several parasitic life cycles, as part of its ongoing role in educating the public on the hazards of parasites.

In addition to run-of-the-mill gigantic tapeworms and threadworms, this Bangkok city museum has exhibits showing malaria-vectors, mosquitoes, and dust mites, through to poisonous reptiles such as king cobras, Russell’s vipers and pit vipers.

Pride of place in warning people of the dangers of parasites though, must go to the giant 65cm (26inch) diameter human scrotum floating in a glass aquarium of formaldehyde.

Dissected from an elephantiasis patient, the biological specimen shows the results of what some experts claim is one of the most common causes of disability in the world, and in many instances spread through a parasite carried by mosquitoes.

Elephantiasis was popularized in the 1980s motion picture The Elephant Man starring John Hurt who played the role of Joseph Merrick, a severely deformed man from the 19th century. Originally it was thought Merrick had suffered from elephantiasis, but it is now thought he may have suffered from protoeus syndrome.

Particularly impressive among the 1,000 specimens on display is the complete, hand-dissected human nervous system, and the cardiovascular system.

The most dramatic exhibits though are contained in the Songkran Niyomsane Forensic Medicine Museum. Forensic medicine in Thailand was initiated at Siriraj hospital and as such this museum houses a large collection of specimens related to the modern history of Thailand.

Amongst the grizzly items on display are numerous hemorrhaged brains, severed limbs, and various parts of the body displaying stab wounds, blast force trauma, crush trauma and even a head, cut neatly in half vertically and encased in a glass tank of preservative to show the trajectory of a bullet.

Also preserved for history is the paraffin-filled, mummified body of murderer and rapist See Uey Sae Ung, or Si Ouey as he was better known.

During a reign of terror in the 50s the Chinese immigrant abducted more than six children and ate their hearts and livers, as well as raged a terror campaign of rape on suburban Bangkok. Masseurs are brought in every year to rub Si Quey down with petroleum jelly to preserve the mummified body.

Though the exhibits at the Siriraj Medical Museum are graphic and confrontational, they have not been assembled purely for the sake of curiosity or the macabre.

In addition to attracting large numbers of Thai and foreign tourists daily, the Bangkok medical science museums also attract artists practicing anatomical sketching, Buddhist monks on their journey of enlightenment, and students from Siriraj Hospitals Faculty of Medicine, the largest and oldest medical school in Thailand.

Siriraj Medical Museum is located on the grounds of Siriraj Hospital at number 2 Prannok Road in Thonburi, Bangkok. It is open between 9am and 3pm on weekdays and can be accessed by taxi, or by taking the Chao Phraya ferry to the Tha Rot Fai pier (also called the Bangkok Noi pier) on the western side of the river. Exit and walk due west, then walk left into the grounds of Siriraj Hospital and follow the signs to the Adulyadej building.