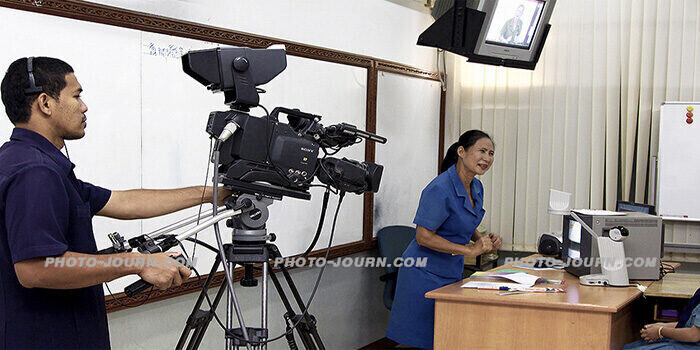 At a nondescript ceremony inside the grounds of Wang Klai Kangwon Palace in Hua Hin, Thailand on December 5, 1995, Khwankeo Vajarodaya, grand chamberlain of the Royal House of Siam, flipped a switch that would change forever the problem of governments globally – the cost effective delivery of quality education to a geographically dispersed population.

The ceremony, also attended by former Thailand prime minister Chavalit Yongchaiyudh brought to fruition a desire of Thailand’s King Bhumibol Adulyadej since taking the throne almost 50 years earlier to provide every Thai child with the ability to learn.

Following his coronation in 1926 King Prajadhipok built Wang Klai Kangwon Palace (English: Palace Far From Worries) as a summer residence. In February 1938 Rama VIII, King Ananda Mahidol, added a school for the children of palace guards and servants, and children of local residents that is today still commonly referred to as ‘The King’s’ School’.

In addition to his tasks as Grand Chamberlain at the Royal Household Bureau, Mr Khwankeo at the time was manager of the Wang Klai Kangwon School and also chairman of the Rajaprajanugroh Foundation, established to provide care, support and education for the many orphans left in the wake of Cyclone Harriet in 1962.

The response to a personal appeal by King Bhumibol to the Thai people to donate to help cyclone victims was such that the Rajaprajanugroh Foundation soon found itself helping children across Thailand, building 45 schools complete free board, accommodation and schooling for those in need.

Education for every Thai child

Faced with a shortage of teachers to staff the schools it was building, especially in remote rural areas, Mr Khwankeo consulted with Thailand’s then Minister of Education, Sampham Thongsamak, on how best to overcome the shortages.

Their discussions quickly expanded to encompass the King’s desire to deliver education to every Thai child.

“With the golden anniversary of the King’s accession to the throne approaching we thought that nothing short of being able to provide education to every Thai child would be a suitable achievement to mark such an auspicious occasion, but in 1995 technology was expensive when you consider our aim was to reach every corner of the kingdom”, Mr Khwankeo said.

With Thailand having launched its first communications satellite in 1993 Mr Khwankeo, who was (and remains today) director of the Royal Radio Station, looked at the possibilities provided by satellite broadcasting.

Soon the concept of live satellite tele-education broadcasting from the Wang Klai Kangwon School was formulated to overcome both the shortage of teachers and schools, in addition to achieving the desire to deliver education to every child in the kingdom.

When the idea was presented to King Bhumibol he quickly grasped the potential and provided Mr Khwankeo with Bt50 million (about $US 1.6 million at the time), a gift presented to him by the Telephone Organisation of Thailand (TOT) to commemorate the anniversary of his 50th year of accession to the throne, to get the project up and running.

According to Mr Khwankeo, “the King was very inquisitive and kept himself abreast of developments in fields as diverse as medicine and agriculture, to the latest developments in technology – and we were required to keep up with him.

“As the details of the program took shape the King’s interest and excitement increased to the point that he was soon providing valuable tips on how to best layout the classrooms, filming techniques, and a range of other matters.

“Once he was satisfied with the technical arrangements he granted permission for the King’s School in Hua Hin to be the “mother school”, and soon the Distance Learning Foundation (DLF) was added to the responsibilities already shouldered by Mr Khwankeo.

Though the DLF operates on a principle of “free and open distance education for all” and “knowledge first, not money first”, Mr Khwankeo said the success of Thailand’s distance learning program was that great results are achieved at minimal cost.

Provided free by the King

Comprising a live visual and audio broadcast using the Ku satellite band directly from the classrooms of the Wang Klai Kangwon School, the Thailand national curriculum can today be received anywhere inside Thailand, in addition to neighbouring countries, using an economically-priced 75cm (29.5-inch) diameter pressed steel receiving dish, a simple decoder, and a standard television – all of which are provided free as a gift from the King.

Four toll-free telephone lines provided by TOT Public Company Limited (TOT) enable students at schools in the furthermost reaches of the kingdom to not only follow the national curriculum live, but for students and teachers, or in their absence mentors, to ask questions and interact with the “mother-school” teachers while the lesson is in progress.

In addition to voice calls, the receiving schools can also ask questions or interact while the lesson is in progress by fax or email.

Overhead costs are reduced through the use of standard florescent lights rather than conventional television studio lights, which also removes the need for stage make-up.

Likewise, the hard floors of each classroom enable the cameras to be moved smoothly without the need for expensive equipment.

Apart from two television monitors at the front of each classroom and one at the rear, student desks aligned in two rows down the length of each classroom and whiteboards instead of blackboards (to protect the cameras from chalk dust) there is nothing other than two dolly-mounted cameras and their operators that differentiate classrooms at Wang Klai Kangwon School to any other in the country. A limit of 40 students per class has been found to add a pleasing acoustic effect to in-class audio.

Commencing with the morning assembly at which the national anthem is played until the end each school day the 2,300 members of the student body and 150 faculty are beamed across the country, in addition to schools in Yunnan, China, Cambodia, Laos, Malaysia, Myanmar, and Vietnam where the King has likewise gifted receiving equipment free of charge.

In addition, the entire curriculum taught on air is later digitised and available for viewing on demand from desktop and laptop computers, in addition to mobile devices such a smartphones and tablets, under the guise of ELDTV primary, ELDTV secondary, and ELDTV vocation.

Not content with simply broadcasting the national curriculum live, the DLF also produces its own teacher manuals to assist teachers and mentors at remote schools to prepare for distance learning and teaching.

The comprehensive manuals contain a daily timetable for the entire academic year in addition to details of the lessons for each day, assignment sheets, detailed lists of preparation material needed, tests, homework assignments and the full lesson plan.

Revised annually, the weighty tomes are delivered to every school throughout the country a minimum of 30 days prior to the commencement of the school year ensuring teachers are in possession of the latest information, with ample time to read.

The same technology used to educate the youth of Thailand is also employed to increase the skill levels of Thailand’s teachers.

Converging internet technology, video conferencing, and satellite broadcasting, Thailand school teachers have been able to increase their skills and knowledge by participating in certificate-level courses in subjects such as English, physics, chemistry, science and mathematics with leading universities and schools in the United States of America.

Now aged 84, Mr Khwankeo still often tunes in to random DLF channels to ensure the goals of the foundation are being delivered and says that each time he does he is pleased with what he sees.

With an annual operating budget of only Bt400 million ($US12.9 million), Mr Khwankeo said the results achieved to date were exceptional when compared with the relatively small amounts of money spent.

Every Thai can increase their knowledge, if they want

“The King has provided the ability for every Thai to increase their knowledge if they want to, while at the same time promoting the precept of rak dee (literally: love good / love to be good – figuratively: to be a better person)”, Mr Khwankeo said.

Not content with his achievements to date Mr Khwankeo said the DLF was now working on a project based on 5G wireless technology and high speed optical fibre that he hopes will soon enable the DLF to broaden its education offering.

“We are not content to sit on our laurels. We must ensure that we achieve the best possible results for the money we spend, or we are failing to practice what we say. Every baht we save enables us to do something more for the benefit of our students.

With the lofty UN goal of delivering universal primary education threatening to fall short of its target  world leaders only need to look to Thailand for a solution to their needs.

“We are delighted to pass our experience and knowledge on to anyone who requests assistance in raising education standards and access globally and like everything we do, we provide this free of charge in accordance with the wishes of the King, Mr Khwankeo added.