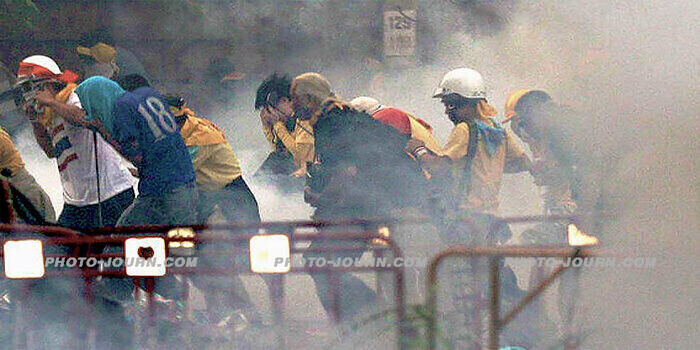 Thailand’s long running political crisis appears to be worsening, with the question no longer being whether the military will step in and oust the government of embattled Prime Minister Somchai Wongsawat with a coup d’état, but when.

In the wake of the bloody October 7 confrontation between police and “anti-government” People’s Alliance for Democracy (PAD) protesters at Thailand’s Government House, relationships between the different parties in the coalition government have become strained. Several parties have publicly threatened to pull-out of the alliance.

At the same time the relationship between the Government and the country’s powerful armed forces has deteriorated to what at best could be described as glacial.

Meanwhile “yellow-shirt” anti-government protesters have stepped up their campaign, with thousands of supporters marching through downtown Bangkok and rallying at major shopping centers to hand out pamphlets and VCDs of the October 7 clash with police.

This latest escalation in the the anti-government protests has taken the action away from a small isolated park of Bangkok to the main business, shopping and tourism centers of Silom, Sukhumvit, and Wireless roads, to the giant Central World shopping mall.

The result of the October 7 police action to clear PAD protesters from Thailand’s Government House, in which two people were killed and almost 500 hundred people hospitalised, has seen the government of this former Asian economic tiger sidelined to the point of being largely irrelevant.

Forced to running the country from hastily constructed offices at Thailand’s former international airport, Don Muang, and numerous leased office sites around Bangkok, the government of PM Wongsawat, Thailand’s second leader in less than eight months, is spending more time trying to remain in power than attending to matters of state.

Of particular significance is a ruling last week by the National Counter Corruption Commission (NCCC) that PM Wongsawat committed serious malfeasance when he was the permanent secretary for the Ministry of Justice  (MOJ) in 1999.

The NCCC has forwarded its findings to the Justice Ministry’s Civil Services Committee (CSC) to consider retroactively firing Somchai from service as permanent secretary for justice.

The ruling could result in PM Wongsawat forced out of the prime minister’s role, as Thailand’s Constitution prohibits anyone fired from government service from becoming an MP.

The beleaguered government is under fire from all sides, with various inquiries into the October 7th violence now starting to deliver their findings.

Initial reports showed that the teargas canisters fired by police at protesters were sourced from China and contained the powerful military explosive RDX.

Thailand’s police chief has said police were unaware of the explosive force of the canisters, blamed for severing the hands, arms, feet and legs of several protesters, and killing two.

The director of the Central Institute of Forensic Science (CIFS) has squarely blamed the explosive, Chinese-made canisters as the cause of one protesters death.

“The tear gas struck at the chest before exploding a second after”, she said in her report.

Meanwhile Surasee Kosolnavin, chairman of the National Human Rights Commission (NHRC) sub-committee investigating the crowd dispersal operation on October 7, said its investigation had found the operation by police was “excessive, violated human rights, and the law”.

Last week General Anupong Paojinda, commander-in-chief of the Royal Thai Army publicly called on PM Wongsawat to accept responsibility for the death and injuries to PAD protesters at Government House and resign.

The comments came when General Paojinda and other top military commanders, along with the commissioner-general of the Royal Thai Police, Police General Patcharawat Wongsuwan, appeared on a live television programme.

General Paojinda said, no government could survive after spilling blood on the street as society could not accept it.

Meanwhile, Air Chief Marshal, Ittiporn Supawong, the Royal Thai Air Force commander-in-chief, proclaimed all branches of the armed forces are united and stand behind the people.

The comments from the powerful Thai military, who see themselves as protectors of the Thai monarchy and answerable only to the King of Thailand, show the government cannot rely on the military for support in its ongoing battle with anti-government protesters.

The comments by the military follow a call by former deputy prime minister, Chavalit Yongchaiyudh, who resigned from the cabinet after ordering the police action against PAD demonstrators on October 7, for the military to mount a coup d’état.

At the time he announced his resignation, General Yongchaiyudh said, a military-led coup d’état is the only way to resolve the political strife.

However, last week Royal Thai Army (RTA) spokesman, Colonel Sansern Kaewkamnoed, denied speculation that the military might mount another coup d’état, a little more than two years after deposing the government of prime minister Thaksin Shinawatra in just such a move.

With PAD protesters still occupying Thailand’s Government House and their protest rallies increasingly interrupting traffic in a city which already has some of the worst traffic congestion in the world, “pro-government” “red-shirt” groups are now threatening to launch their own action.

Retired police General Salang Bunnag, a former deputy police chief, has vowed to lead a group of 1,000 inactive or retired police to retake Thailand’s Government House from the yellow-shirts and return it to the Thai people.

General Bunnag said he plans to launch the reclamation offensive following a religious ceremony on Wednesday, October 22 at the nearby Royal Plaza, where more than 10,000 Buddhist monks will say a mass prayer to bless the country and “mend torn Thai society”.

Major General Sawasdiphol said, “the use of Molotov cocktails against tanks has been practised widely, but never in Thailand. This will be the first and only time that the people have threatened a counter-coup, if tanks roam Bangkok streets.

“In the last coup people gave them (the military) flowers. But if they come out now, people will hurl Molotov cocktails at them’, he added.

The retired army General said he was currently training hundreds of pro-government supporters how to fight at a secret training camp, adding that several pro-government movements in the Northeast are poised to take to the streets and fight troops should a coup d’état be attempted.

The comments have prompted Pracharaj Party leader, Snoh Thienthong to claim another bloodbath will definitely happen because certain people are instigating unrest.

Meanwhile embattled PM Wongsawat has been forced to continue taking extraordinary measures to ensure his own safety and avoid being “captured”, paving the way for a military putsch.

After being forced to scale a spiked, steel fence to leave Government House on October 7th, the PM opted to take a charter flight instead of the usual military jet to Ubon Ratchathani over the weekend to visit soldiers wounded in border clashes with Cambodian troops last week.

With the royal funeral service of HRH Princess Galyani Vadhana scheduled to take place next month (See: Thai royal cremation set for six days in November) it is difficult to see the current political situation being allowed to continue much longer.

The so-called PAD is campaigning for the resignation of the elected Thailand Government, accusing it of being a puppet of former prime minister Thaksin Shinawatra, who was ousted in a September 2006 coup d’état and who fled Thailand while on bail while facing corruption charges and has since sought political asylum in England.

The PAD, comprises mostly Bangkok elite, businessmen, generals and aristocrats, and is demanding the introduction of an undemocratic “new politics”‚ where 70 per cent of the parliament would be appointed and only 30 per cent elected.

It has vowed to not give up its occupation Government House, which it first stormed on August 26, until the current government resigns.