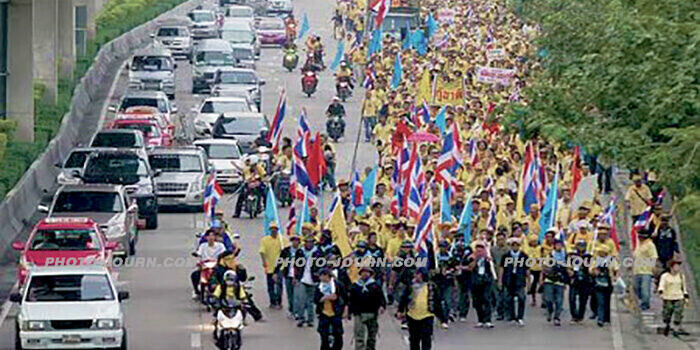 The head of Thailand’s tourism promotion authority has predicted the bloody and violent clashes between police and “anti-government” People’s Alliance for Democracy (PAD) protesters last Monday (Oct. 7) will not have a significant effect on the Thailand’s tourism industry.

Tourism Authority of Thailand (TAT) governor, Phornsiri Manoharn, said the clashes happened only in limited areas near Government House, the PAD’s stronghold, with the affected area spanning only three square kilometers (about 1.15 sq.miles), leaving other areas of Bangkok unaffected

While Ms Manoharn said the TAT had yet to estimate the impact on the coming high season, she pledged to closely monitor the situation

She said that in the wake of the latest violent clashes she had called an urgent meeting of all deputies and senior officials to assess the situation and to immediately explain the clashes to the TAT’s 22 overseas offices.

Ms Manoharn’s assessment is in direct contrast to that of other Thailand tourism chiefs, who have all but written off the coming peak season.

Porntip Hirunkate, secretary-general of the Tourism Council of Thailand (TCT), predicted the bloody clashes would result in losses of at least BT10 billion (about $US 290.4 million) in tourism revenue over the remaining three months of this year alone.

Similar views were echoed by Apichart Sankary, president of the Thai Travel Agents Association (TTAA), who said, “don’t ask me about the country’s image. It’s gone already in the eyes of foreigners.

“What I can do now is pray the situation will improve as soon as possible”, he added.

Natwut Amornvivat, president of the Thailand Convention & Exhibition Bureau (TCEB), said the violence would hurt the meeting, incentive, convention and exhibition (Mice) market. TCEB may reduce its Mice target of 1.2 million visitors next year due to the global recession and political turmoil.

“The Asian market, which accounts for 80 per cent of total Mice visitors in Thailand, will easily panic‚ he said.

In Phuket plans by officials to celebrate the arrival at the airport of the six millionth passenger of 2008, previously predicted for around this time of the year, have been postponed, with the figure now not expected to be reached until some time in December.

Coming on top of the clashes in September, the imposition of a state of emergency in Bangkok, the closure of three airports stranding more than 150,000 foreign tourists in August, and the shut down of the nations rail system, the assessment by the TAT’s chief would appear to indicate an organisation totally out of touch with the industry it represents.

The comments came as the airline foreshadowed further flight cutbacks, particularly on regional routes, and disclosed it had filled only 70 per cent of its seats in the third quarter.

”What is terrible about the current political crisis is its open-ended nature. Unlike 9/11, SARS and the tsunami, we don’t when it will end’,’ Mr Chanapai said.

A quick look at any of Thailand’s English language newspapers highlights how dire the situation is.

From Chiang Mai in the north to Phuket in the south newspaper classified advertising is full of businesses in Thailand’s tourism sector being offered for sale.

Everything from guest houses and hotels to deep sea fishing charter, diving schools and beer bars are appearing in record numbers, with many desperately carrying the tag ‘for urgent sale’.

According to one Chiang Mai tour operator, “saying that the Bangkok clashes were only in a small part of the city is like telling people the Marriot Hotel bombing in Pakistan or the 2002 Bali bombings were only in isolated pockets of those cities”.

While it is true, no one cares. When it comes to holidays it is generally the wife and/or mother who makes the decision on where the family will go. The prospect of any disruption or violence is something most wives and mothers won’t even contemplate.

Following the first round of violence in August, 26 countries issued warnings to their citizens to avoid traveling to Thailand.

Many of those nations still have not lifted their advisory despite intense lobbying by Thailand’s Ministry of Tourism and Sports (MOTS) and TAT regional representatives.

The so-called PAD is campaigning for the resignation of the elected Thailand Government, accusing it of being a puppet of former prime minister Thaksin Shinawatra who was ousted in a September 2006 coup d’état and who fled Thailand while on bail facing corruption charges. He has since sought political asylum in England.

The PAD comprises mostly Bangkok elite, businessmen, generals, and aristocrats, and is demanding the introduction of an undemocratic, ‘new politics’‚ where 70 per cent of the parliament would be appointed and only 30 per cent elected.

It has vowed to not give up its occupation of Government House, which it first stormed on August 26, until the current government resigns.