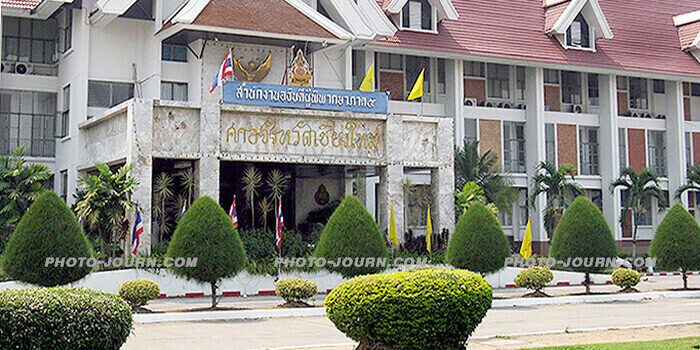 Just two days after the Chiang Mai Provincial Court handed down a four year sentence to 61-year-old Australian William Thomas Douglas for the March 2008 murder of American tourist Gary Bruce Poretsky, Thailand’s Court of Appeal was affirming a life sentence for a Pakistani man convicted for murdering a Thai woman in 2006.

Mohammad Arif was found guilty on March 30, 2007 by the the Ratchada Criminal Court in Bangkok of murdering Ubon Ratchathani English-language teacher Dissanee Thongnarkthae in a Bangkok Hotel room on May 8, 2006.

Arif had come into contact with Ms Dissanee through an internet chat room and arranged to meet her in Bangkok. However when Ms Dissanee arrived in Bangkok she was met by Arif instead of the handsome Spaniard she expected to meet.

According to police and court reports, Arif stabbed the Thai teacher, killing her in “impulsive rage”, and then dismembered her body and attempted to dispose of body parts in several places.

The Ratchada Criminal Court originally sentenced 34-year-old Arif to death, but reduced the punishment because he confessed and had proved “useful”.

Court-ordered payments to the victim’s family are subject to 7.5 per cent interest per year until fully paid.

In his appeal Arif claimed to have acted out of “impulsive rage” after Ms Dissanee had insulted his religion.

Arif asked the court for a lighter sentence and to reduce the Bt5.3 million compensation sought by the victim’s family.

The court judges refused to commute the sentence to a 25-year imprisonment and also upheld the lower courts ruling as to the levels of compensation that should be paid.

The judges said there was no substantial evidence to substantiate the defendant’s claim that he was forced to kill Ms Dissanee in “impulsive rage” or that he did not steal her belongings.

Just 644km to the north though, the Chiang Mai Provincial Court appeared to accept the claim by Douglas that when he put first two bullets into Mr Poretsky and then a third into his face as he lay on the floor that he did so in “impulsive rage” and “didn’t know what I was doing.”

The two vastly different sentences by the two courts raises many questions.

The fact that Douglas also received only a total of one-and-a-half years, reduced by half for pleading guilty for two firearms offences that each carried a maximum of five years imprisonment, raises further questions.

The family of Mr Poretsky have already petitioned the US State Department and a string of senior US law makers, politicians, and media outlets over the Chiang Mai court sentence, but so far those appeals have brought little action.

If expatriates living in Thailand, as well as tourists, foreign investors and the Thai public are to have any faith in the Thai legal system, the sentencing and conduct of the Douglas trial should be subject to close scrutiny by both the Thai and US governments.

Otherwise the message is clear. Killing a Thai is more serious a crime than murdering a foreign tourist, or that a Muslim murderer is treated more harshly than a murderer from a developed nation.

Either way, the signals are all bad for a country experiencing record inflation, a destabilised political system, increasing levels of violence against dwindling tourist numbers, and a festering civil war in the south.

Without a prompt judicial review of the sentence imposed on Douglas for murdering Mr Poretsky in Chiang Mai earlier this year, Thailand is making it clear to everyone that there really is one law for the rich and another for the poor. Or that the Thai Government subscribes to the Hebrew proverb that equality of man is an empty phrase so long as it does not exist among the world’s peoples.