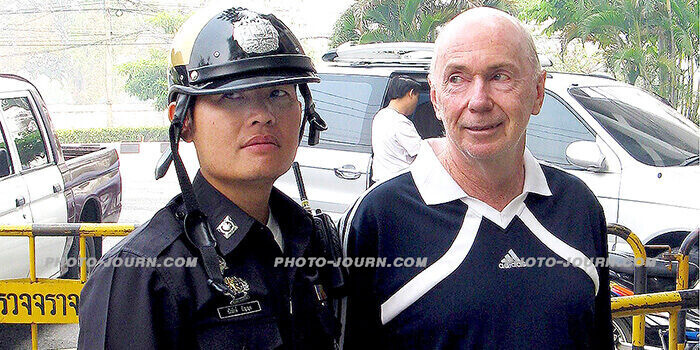 A 60-year-old Australian man has been remanded in custody and formerly declared a suspect in the fatal weekend shooting of 46-year-old American tourist Gary Bruce Poretsky in the northern Thailand city of Chiang Mai.

William Thomas Douglas, a former resident of Willetton in Western Australia, surrendered to Thai police on Saturday one-and-a-half hours after he is alleged to have shot and killed Mr Poretsky, a resident of Hawaii, in a Chiang Mai restaurant.

Captain Pamthong said that even though Mr Douglas had admitted shooting Mr Poretsky and had surrendered himself with the weapon to Chiang Mai district police, Thai law required bullets and casings found at the scene to be matched to the weapon.

“We do not expect this case to take a long time. Mr Douglas has already admitted he shot the American tourist, but he said he did not plan to kill him”, Captain Pamthong said.

According to Captain Pamthong, Douglas said he shot Mr Poretsky “because he doesn’t like Americans. He thinks they talk down to everyone and consider themselves better than everyone else”, he said.

Mr Douglas, who claims to be a Vietnam War veteran and a former member of the 5th Battalion Royal Australian Regiment, was not represented at the brief hearing.

After the hearing he said he had “no regrets” over killing Mr Poretsky, who was visiting Thailand on a two week trip to receive dental treatment in Bangkok.

At the time of his death Mr Poretsky was found to be carrying US$6,000 in $100 notes leading to speculation by friends of the dead man in Hawaii that given the obscure location of the restaurant that this could have been a robbery gone bad.

Restaurant staff where the shooting occurred said Mr Poretsky had arrived at the restaurant in the company of “a dark skinned Thai woman identified in local media as having the first name Jirewadee.

“They were drinking and the girl invited the man who did the shooting to join them”, a staff member said.

According to restaurant staff Mr Douglas had shown Mr Poretsky he was carrying a gun earlier in the evening and Mr Poretsky had berated the Australian for carrying a weapon.

An argument then ensued, but this was earlier than when Mr Poretsky was shot.

Police have said they intend to charge Mr Douglas with premeditated murder, a charge which carries a maximum penalty of death by lethal injection in Thailand. He also faces a number of firearms offences.

Mr Douglas said he plans to plead guilty to the charge of murder when he is formerly charged in the hopes of receiving a lighter sentence, as is customary in Thailand.