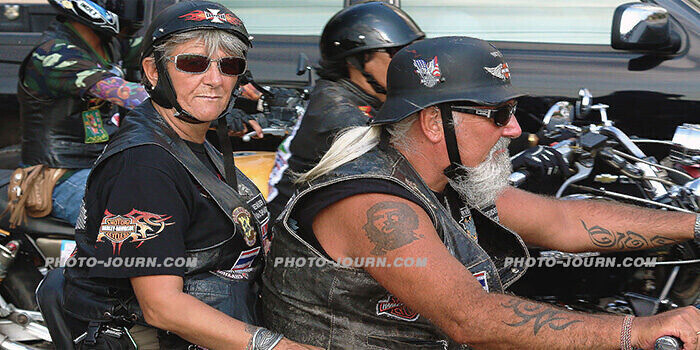 If names such as the Hells Angels, Bandidos or Deaths Messenger, or the distinctive deep throated growl of Harley Davidson’s are enough to cause you to clear the kids from the street, lock the doors and pull the blinds closed, Pattaya, Thailand, was not the place to be this past weekend (Feb 12 & 13) with the 2011 Burapa Bike Week drawing bikers and their distinctive machines from across the globe. 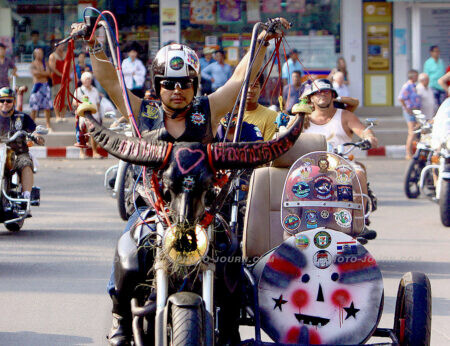 However, for those for whom leather clothes, body art, hot dance music (and dancing girls), along with very, very, very big and noisy motorbikes are what heaven is made of, the 2011 Burapa Bike Week rally was the closest they will come without departing their mortal body.

For the past week the reverberating noise of big bore motorbike engines, predominantly from Milwaukee, Wi. manufacturer Harley Davidson, have reverberated around the coastal city as an estimated 12,000 bikers turned the city into the Thailand equivalent of Daytona Beach for Burapa Bike Week 2011.

Big bike owners from as far away as Europe, the USA, and Scandinavia traveled to Thailand for the 2011 Burapa Bike Week, while others rode their unique, “hogs” from as far as Malaysia and Singapore.

The yearly Burapa Bike Week rally is the major charity fund raising activity of the Pattaya Burapa Motor Cycle Club, whose members for the last 14 years have used money raised from the event to purchase computers and sporting equipment for local underprivileged children. 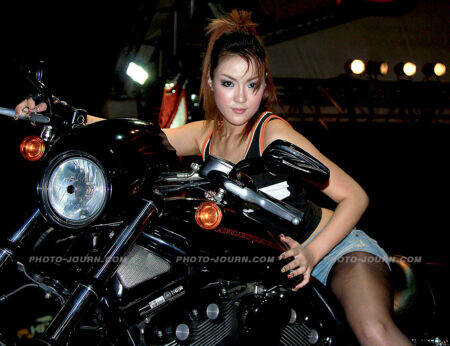 Though public and private events have been held throughout the week, with the biker population gradually increasing over that time, the grand finale begins on the Saturday afternoon, when many of the bikers participating in the event conduct a mass ride around and through Pattaya and Jomtien, before heading back for the final nights party.

Despite 13 years of practice, Thai police again showed their lack of skills at traffic control, with all roads leading the rally site total chaos as tens of thousands of people using any piece of tarmac available, including both sidewalks, all headed for the biggest party in town.

Coinciding with the Burapa Bike Week is the annual sport and stunt bike riding competition, where owners of the powerful, yet compact super-sports bikes go through their paces in pursuit of an array of trophies, while at night, once the heat of the day has dissipated, it’s the turn of Thailand’s CarAudio Club members to get together for their annual carpark dance party.

Often sporting sounds systems many times more expensive than the host vehicle, these highly customized vehicles feature sound systems that require special voltage boosters and cooling systems, with lazer lights and and all over glow requiring more electricity to power than a Thai rural village uses in a month, radiating all around the vehicle.

While the noise from 70 or 80 cars all playing their car audio system at full volume can easily be imagined, add to this extremely expensive amplifiers, filters, equalizers, and literally hundreds of speakers all mounted on the outside of vehicles and the noise is equivalent to standing near a jet aircraft engine.

With the sound systems of all vehicles wired together, two of Thailand’s leading dance and trance DJs fired up the decks as car owners tuned and balanced their sound systems, switched on their lights, and reveled in the the deep pulsating bass-heavy dance tunes, that created a wall of sound enveloping the entire outdoors area. People walking in front of vehicles with some of the largest speakers and amplifiers, surprised to buffeted by the pulsating, but distortion free, music emanating from them.

It’s only logical that where there are hot cars and hot music, the only missing ingredient is hot girls. As in past years the thousands of spectators were not left disappointed, with five Coyote dance girls taking strategic positions atop cars the cars.

As thousands of photos and minutes of video were shot on cameras and handphones, the scantily clad nubile dancers danced away on top of their expensive stages to some of the latest hot hard dance and trance tunes available. 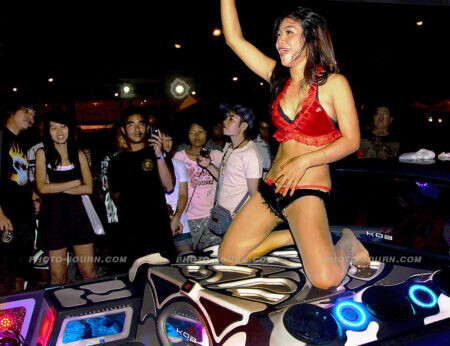 Inside the main Burapa Bike Week staging area, the outside of the Pattaya Indoor Stadium, thousands more people attended a large, free outdoor concert featuring a bevy of Thailand leading rock & roll and Reggae bands, while around the perimeter tens of thousands more inspected the various exhibitions.

Though big bike manufacturers Harley Davidson and Yamaha failed to put in an appearance, the exhibitions put on by local Harley Davidson customising shops and an assortment of big bike sellers meant big bike aficionados received their annual “fix”.

In camping areas around the Burapa Bike Week rally grounds, as well as at beverage tents around the rally, groups of bikers sporting their distinctive club patches from Germany, Finland, Malaysia and just about every one of Thailand’s provinces, mingled together enjoying the camaraderie of the annual event.

While names such as the Hells Angels, Deaths Messenger, and Bandidos might conjure up negative impressions to some people, at the 2011 Burapa Bike Week the members of these clubs showed it was all about riding to live and living to ride.