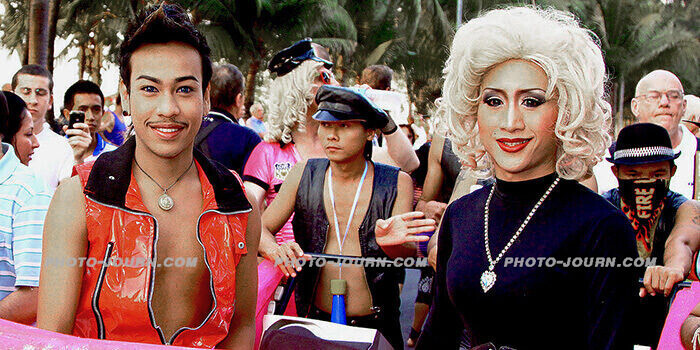 The third annual Pattaya International Bed Races were held yesterday, January 30, 2011 with thousands of local and international holiday makers enjoying the spectacle along the beachfront of one of Thailand’s most recognised tourist destinations.

Organised by the Pattaya chapter of Rotary International with the support of Pattaya City Hall and the Tourism Authority of Thailand, the annual Pattaya International Bed Races have become synonymous in Pattaya with the last Sunday of January, with foreign and Thai-owned local businesses straining to raise funds for the locally underprivileged.

Local media baron and senior Pattaya Rotarian, Niels Colov, said that though the number of entrants was slightly down on last year because of the economy, he was optimistic that supporting leisure and fund-raising activities would boost the money raised to this years target of Bt700,000 (about $US22,500).

“We started Pattaya International Bed Races three years ago as our primary fundraising event for local underprivileged people and to also promote the city as an attractive family-orientated destination and not just for those drawn by the city’s notorious night entertainment.

“People coming to Pattaya often get a false impression of the community situation because of the brightly lit and dynamic entertainment precinct.

“Like just about any city worldwide there are individuals and families here doing it hard and through this event, which is seen on TV networks globally, we try to improve the lives of people less fortunate than ourselves and for whom the lights and music of the entertainment area have little importance”, he said.

Mr Colov said money raised from the 2011 annual Pattaya International Bed Race will be distributed to help underprivileged local residents pay school tuition, book and uniform fees, as well as to provide schools with computer equipment for students use, and to assist other local groups in their work with the city’s poor.

While previous years bed races have been held in the late afternoon, a change this year saw the event turned into an evening affair, providing entrants with considerable relief from Pattaya’s daytime temperature of 32C (about 99F), while the Beach Road route enabled competitors to enjoy the afternoon sea breezes.

As dusk fell over the sea-side resort, competitors were flagged off in pairs, sprinting, and straining as they pushed their “beds”, in many instances highly decorated boxes on sturdy castors, to the encouragement of tourists crowding the beachfront bars and sidewalks lining the route to the start of the city’s Walking Street entertainment zone.