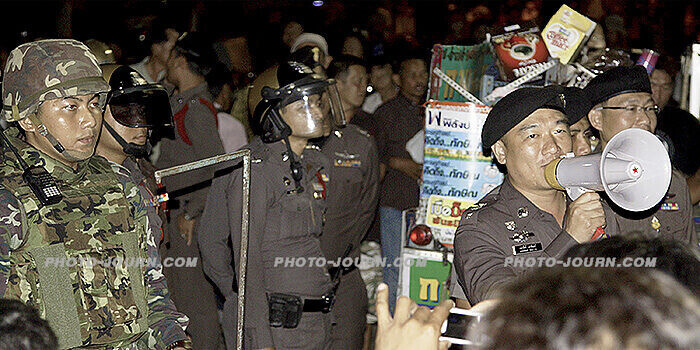 One week after Thai soldiers clashed with rioting pro-democracy “red shirt” protesters on the streets of Bangkok the country is still governed under the state of emergency decree imposed by Thailand Prime Minister Abhisit Vejjajiva.

The emergency declaration bans gatherings of more than five people for political purposes, censors news reports considered threatening to public order, and allows for the use of the Thai military to quell unrest.

While the majority of those foreign tourists who have continued with their holiday despite the battle for Bangkok last week would hardly notice, armed Thai soldiers and police with riot shields remain stationed at strategic locations around Bangkok, particularly in the area around Government House.

As the Government attempts an all out round-up of almost the entire red shirt leadership, the law that brought stability to Bangkok and put an end to the anarchy could now be doing more harm than good.

Situated just two kilometers from Government House and directly in front of Bangkok’s Grand Palace is a large open field named Sanam Luang. It is used annually for the Royal Ploughing Ceremony and the Ceremony of Calling the Rain, as well as the site for royal cremations (See: Thai royal cremation set for six days in November).

Sanam Luang is also the traditional starting point for political gatherings where protesters rally before marching to Government House. Both the “yellow shirt” People’s Alliance for Democracy (PAD) and the United Front for Democracy Against Dictatorship (UDD), or “red shirts”, have recently used the large space as their staging area. Bangkok residents also find the open field provides cooling breezes at night to escape the stifling heat of the city and many go to just hang out and relax.

After the military crackdown of April 13, 2009 against the red shirt pro-democracy protests, an estimated 500 protesters retreated to the open field, reluctant to give up their cause.

While this group of protesters soon went home, many are now returning each night to exchange news, gossip about the military action, or to talk about people missing following the battle for Bangkok last Monday (April 13, 2009).

Ignoring the emergency decree these red shirt supporters gather in groups of up to 50 people, forever watchful of military and police patrolling nearby as they exchange their tales. Photos, flyers and CDs are exchanged quietly in the shadows, while video of events from April 13 captured on mobile phones is transferred from one handset to another.

In one group a woman openly weeps as she talks about wanting democracy for Thailand, another expresses her admiration for fugitive former Thailand prime minister Thaksin Shinawatra, while in another group a women recounts viewing the early morning military assault on protesters.

Flyers showing compilations of photos from the events of April 13 are shown or given away, as well as photographs showing people allegedly killed or injured in the red shirts clash with the Thai military.

The ongoing use of the emergency declaration in censoring the media, combined with the lack of impartiality by the majority of Thailand’s vernacular media and its two English language daily newspapers, is also resulting in rumours and disinformation or misinformation flourishing.

At least one photo being widely circulated and shown at Sanam Luang each night is 17-years-old, having been taken during the Black May protests in 1992 in which 52 people were officially declared to have been killed by the Thai military and more than 187 officially declared as missing.

Other rumours abound of those alleged to have been killed at Din Daeng on April 13, having been spirited out of Bangkok by the Thai military and buried in the eastern province of Kanchanaburi, while another tells of them having been cremated at a string of Buddhist temples in and out of Bangkok.

For his part Mr Vejjajiva, who gained the prime ministership on the back of the “yellow shirt” protests by the PAD last year and convenient court decisions based on changes to Thailand’s constitution by the military junta that followed the coup that ousted the government of Thaksin, is appearing to at least reach out to those claiming to be disaffected.

In the last few days he has said that if there is solid proof that military weapons were used when the army cracked down on red shirt protesters his government is ready to consider the charges.

Mr Vejjajiva also said he would also listen to allegations that protesters or residents were killed during the military actions on April 13.

He has also called on those unhappy with the present political system to become engaged in public debate and help find solutions for the ongoing political conflicts so Thailand “can move forward and for the benefit of everyone in our society”. Mr Vejjajiva is also considering an amnesty for those convicted of political offences, but not those convicted of criminal violations for provoking uprisings, as part of a national healing process.

“I remain open-minded about amnesty for political wrongdoing based on what many say are unfair laws, but will definitely draw the line on criminal violations, such as inciting riots,” he said.

He has though, ruled out any negotiations with former prime minister Thaksin saying, “I have no idea what we would talk about”.

Following the red shirt riots last week the Government cancelled Thaksin’s ordinary passport, after cancelling his red diplomatic passport last December. Thaksin is currently in exile having fled Thailand while on bail and later being convicted in absentia of corruption involving a land purchase by his former wife and sentenced to two years jail.

It has been reported he has been appointed as a special ambassador for Nicaragua and provided with a diplomatic passport as part of this role.

While Mr Vejjajiva appears to be trying to live up to his claims of being a reformist bent on repairing the divide between the primarily Bangkok elite and the poorer rural and working class, he is having a difficult time convincing red shirt supporters of his aims.

Those at Sanam Luang each night dismiss his claims of investigating alleged deaths of protesters as mere smooth talk. “There won’t be any investigation because the army has burnt or buried the bodies” one man says. These comments are quickly translated into Thai and everyone adds their vocal agreement.

Other die-hard Thaksin supporters insist that he should be allowed to return to Thailand and be involved in politics again, highlighting the help he provided the rural communities, particularly in Northern Thailand, as well as the Bt30 (about $US0.84) medical scheme that lets the poor receive subsidised medical treatment at public hospitals.

A young man steps forward and claims to have been at Din Daeng when the Thai army first charged demonstrators at around 4am on April 13. “The army throw (sic) gas at us and attack (sic) us. I saw people shot and fall down. After I saw the soldiers put them in a truck”, he says.

These comments are also translated into Thai, causing the group to grow larger and become more vocal. The noise attracts the police and military patrols, who up to this point have been content to stand back and take a non-interventionist role.

They soldiers and police wade into the group and tell those gathered they have to break up and move away. This only angers the red shirt supporters and soon the police and soldiers are subject to a hail of abuse. Again the people are told they have to disperse resulting in more shouts and after a few minutes the military and police move back to their previous positions, while some of the group also call it a night.

Another of the red shirt supporters tells me quietly that more than 400 people are missing. While this figure is ridiculously high, it is a further example of how misinformation or disinformation is being fermented and disseminated at Sanam Luang each night.

Others point to the Bt1 million (about $US28,100) reward the police have announced for information leading to the arrest of 20 red-shirt officials wanted for instigating rioting at the Interior Ministry last Sunday (April 12, 2009), damaging the prime minister’s motorcade and injuring security officials.

“Why are our leaders arrested and the people who took over Government House and the airports not? Why are our radio and TV station closed and the yellow shirt ones not? It’s a double standard. It’s not democracy”‚ one woman says, again starting to excite the group.

The red shirt supporters and protesters believe many people were killed and their bodies removed by the army despite the government insisting nobody was killed and statements by Royal Thai Army (RTA) spokesman Colonel Sansern Kaewkamnerd that claims soldiers had used live bullets are untrue.

The lack of freedom to discuss these issues openly because of the emergency decree is only causing the rift between the two sides to deepen and fester. Each night the gathering gets larger, and each night the stories get exaggerated or distorted a little more. Fugitive red-shirt leader Jakrapob Penkair, who went into hiding after an arrest warrant was issued on April 13, has come out and claimed to be building a base for future red shirt action, as well as threatened to take the movement underground

“I believe people are now deciding whether peaceful means serve them best. We are not encouraging violence, but we have to admit that people have been repeatedly disappointed. We’ve spent the past couple of years educating people, and the movement has entered the “action” phase”, he is reported to have told the Singapore Straights Times.

While the state of emergency declaration is having no effect at all on tourists, in the shadowy depths of Sanam Luang each evening people with less pure motives than democracy find a sympathetic group to distribute material to that could one day damage the one thing both sides of the Thai political divide claim to respect.

A video compilation of the five days is at Songkran Battle for Bangkok April 8 – 13, 2009 (video)