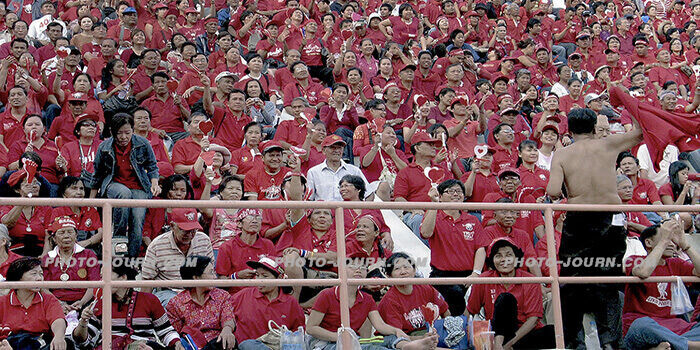 Less than three months after thousands of yellow-shirted anti-government protesters seized Thailand’s main international airport stranding hundreds of thousands of foreign tourists, protesters are again on the streets of Bangkok.

More than 10,000 red-shirted pro-democracy protesters have surrounded Thailand’s Government House in an attempt to pressure the government of Prime Minister Abhisit Vejjajiva into dissolving the House and dismissing Foreign Minister Kasit Piromya, a prominent member of the People’s Alliance for Democracy (PAD) who strongly supported shutting down the two Bangkok airports late last year.

In scenes remarkably similar to those that lead to both Bangkok airports being seized by the “Yellow Shirt” PAD, an estimated 15,000 members of the United Front for Democracy against Dictatorship (UDD) and the Democratic Alliance Against Dictatorship (DAAD), a group linked to former prime minister Thaksin Shinawatra, marched through Bangkok yesterday before laying siege to Government House.

At the same time thousands of farmers have also been protesting, demanding that the government set aside more funds to solve their debts, as well as demanding subsidies to prop up the prices of agricultural products.

The fresh round of political protests comes before the damage caused last year to the grounds of Government House by tens of thousands of Yellow Shirt PAD protesters who occupied it for more than three months have been repaired, and just days ahead of the 14th Association of Southeast Asian Nations (Asean) summit postponed since last December due the PAD protests.

Foreign governments have been quick to re-issue alert warnings to their citizens, with the British Foreign and Commonwealth Office advising it’s citizens the political situation in Thailand remains “very uncertain”.

Likewise the governments of Australia, and Canada continue to advise their citizens to exercise a high degree of caution.

The Yellow Shirt protests last year resulted in Prime Minister Vejjajiva becoming Thailand’s third prime minister in less than a year and saw the balance of power shift to the Democrat Party after a number of politicians changed sides following the deregistration of the then ruling People’s Power Party (PPP) in what many people believe was pressure behind the scenes from the powerful Thai military.

Since taking power the Government has been dogged by claims of nepotism and cronyism, a scandal involving the supply of spoiled canned fish to flood victims, a mysterious Bt250 million ($US6.988 million) donation, claims of rewards having been provided to leading PAD members, and disagreements between the new coalition members.

Thai government scurries to save face

More than 3,000 police and 750 soldiers have been deployed to secure Government House, with road construction equipment, water trucks and barbed wire also being used.

The “Red Shirts” have attracted up to 40,000 supporters at previous rallies, though this is the first time since the new government came to power a little over two months ago that they have laid siege to public buildings in a move similar to those used by the PAD last year.

While Prime Minister Vejjajiva is publicly treating the protest as little more than a minor disturbance, the heavy security cordon along with the relocating of the weekly cabinet meeting to Hua Hin, about two hours drive from the capital, shows the Government is not taking any chances.

With leaders from the 10-member Asean due to begin arriving in Hua Hin on Friday for the delayed summit, the Government will be keen to ensure it doesn’t suffer any further loss of face. A violent confrontation with the Red Shirts would be extremely embarrassing, as too would any disruption to the summit.

Thailand has already been embarrassed by the political musical chairs, with the summit first being moved from Bangkok to Chiang Mai due to the Yellow Shirts’ protests and then delayed until this week due to the change of government.

While the protests, rallies and marches by the Red Shirts to date have been considerably more controlled and peaceful than those by the yellow-shirted PAD last year, there is no guarantee this will continue.

The sight of political protesters again on the streets of Bangkok is also not one those in the country’s depressed tourism industry will relish, with this year’s tourism arrivals and occupancy levels running between 25 and 40 per cent below those for last year.