Army clampdown on Thailand media in wake of martial law 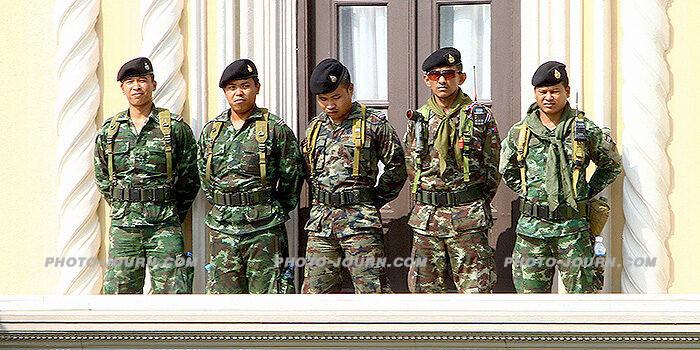 Since rolling Humvee’s and trucks laden with armed troops through Bangkok in the early hours of Tuesday (May 20) Thailand’s National Peace and Order Maintaining Council (NPOMC) has gradually withdrawn the majority of soldiers from public view, at the same time issuing a steady stream of orders broadcast on Thai television.

Of 12 such martial law orders to date five have restricted freedom of expression and placed increasing tighter restrictions on Thailand media rights and freedoms. This includes prohibiting news media from carrying content such as interviews with former government officials, academics, and civil society that could cause opposition to the NPOMC.

In the first 24 hours 14 satellite television operators and hundreds of community radio stations were shut-down, while soldiers were reportedly stationed inside newsrooms “monitoring every word that is being broadcast”, with anything even mildly critical of the imposition of martial law banned, one TV journalist said.

While Thai army soldiers still surround the pro-government United Front of Democracy Against Dictatorship (UDD) “red-shirts” protest stage on the western outskirts of Bangkok, there is none visible at the sandbag bunker reinforced People’s Democratic Reform Committee (PDRC) protest site in front of the UN headquarters and extending around Government House.

Freedom to enter, search, and detain

Amongst other things, the imposition of martial law enables the military to search people, vehicles, homes and buildings and inspect messages, letters, parcels, books and other publications without a warrant. It can also prohibit meetings or gatherings, restrict print and broadcast media and limit movement by land, water, or air, in addition to banning the possession of “communication devices”.

Although Thailand army chief General Prayut Chan-o-cha has continually denied the imposition of martial law is a coup, stating “my job is to keep peace and order”, many are calling it “a half-a coup”, “a coup by another name”, or “a slow-moving coup”.

After months of “fence-sitting” the move by the Royal Thai Army (RTA) to take on the role of “honest broker” and attempt to mediate a peaceful solution is one of the scenarios, though General Chan-o-cha is not known for his patience or diplomacy.

While the army has not banned political rallies, it has ordered pro- and anti-government protesters to confine rallies to their two well separated protest sites.

Red-shirt leaders have cautiously accepted in good faith assurances that the military have only deployed to ensure no more deaths occur, with 28 people having been killed and some 800 injured since mass protests against the then government’s blanket amnesty bill erupted in October last year (See: Amnesty Bill Sets Thai Political “Carnival Wheel” Spinning Again). Its leadership has warned though that the wrath of the movement will descend on Bangkok should democracy be suspended.

Elections in August, October or 2017

Recently deposed caretaker prime minister Niwatthamrong Boonsongpaisan said he had submitted a proposal to the Election Commission of Thailand (ECT) for it to hold a fresh Thailand general election on August 3, however at a meeting with the NPOMC on Wednesday, the EC countered with plans for an election in five months time, or in one or two years – a suggestion that will no-doubt raise the anger of the red-shirt movement.

According to Khaosod English, Election Commissioner Somchai Srisuthiyakorn told journalists: “The Election Commission insisted at the meeting that an election is still the solution to the country. It’s just we have to wait for the right moment, so that the election takes place in peaceful and orderly manner, and a universally-accepted government can be formed after the election.”

The closed-door meeting called by General Chan-o-cha, was attended by Senate Speaker Surachai Liengboonlertchai, Mr Srisuthiyakorn and leaders of the UDD and PDRC.

While no agreement was reached on how the situation should proceed an army spokesperson said the seven different parties had agreed to return to the NPOMC this afternoon to continue discussions.

A Suan Dusit Rajabhat University Poll of 1,264 men nation-wide between May 20-21 found that almost 76 per cent of respondents agreed with the implementation of martial law, while 47.15 per cent said it will help solve the long-runny political problem.

Foreign and Thai business associations and chambers’ of commerce have also generally welcomed the imposition of martial law, though many said the need for the law should be reviewed regularly and the army should return to their barracks at the earliest opportunity.

With the PDRC publicly vowing not to abandon its push for a suspension of democracy, an appointed prime minister and up to two years of reform prior to any election and the caretaker government insisting elections should be held as soon as possible, the two groups remain deeply polarised.

What steps the RTA will take if no agreement can be reached over the next few days remains to be seen, but at this point the majority of oppressive measures have been directed at the caretaker government, the UDD, and the Thailand media.