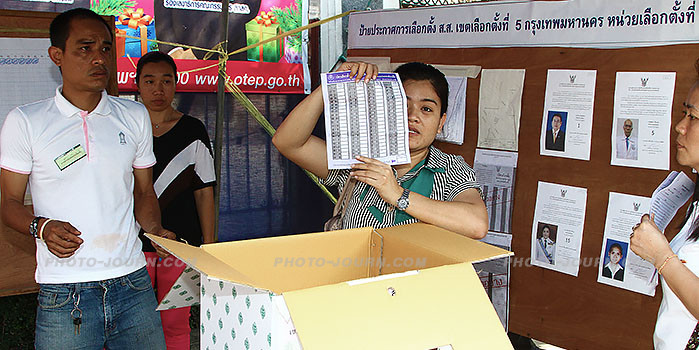 Last Sunday more than 20 million Thais participated in the the 2014 Thailand general election, defying the country’s main opposition Democrat Party and anti-government protesters, who had separately vowed to stop the election from proceeding.

While the 46.79 per cent turnout of the 43,024,042 electoral pool* was a dramatic drop on the 75.03 per cent turnout of eligible voters in the 2011 Thailand general election, it was a significant slap in the face for those who had been calling for the establishment of an unelected “people’s council” ahead of any election.

The Thailand Election Commission (TEC) said 71.38 per cent of voters cast a valid vote, while 12.05 per cent were void. Of the valid votes 16.57 per cent were marked “none of the above”, while 11,041 people filed complaints with police saying they were unable to exercise their voting rights due to the ongoing political unrest.

Across the nation voter turnout at polling stations was low, The highest turnout, 75.05 per cent, was recorded in Chiang Mai, the traditional supporter base for the ruling Pheu Thai Party (PTP). However, the average across the entire northern region was just over 56 per cent, with almost 21.2 per cent of ballots marked “none of the above”.

The lowest voter turnout was in the Thailand’s southern region, excluding the nine* southern provinces, where just 36.75 per cent of the population cast their vote, 19.72 per cent marking their ballot papers “none of the above”.

According to election officials 84,325 or 89.28 per cent of 94,454 polling stations covering all 375 constituencies operated smoothly, with 310 constituencies being totally unaffected by anti-election protesters, 26 partially affected, and 39 constituencies unable to open. Sixty three constituencies were thus unable to elect a member of parliament (MP) in the 2014 Thailand general election.

The blazing gun battle which saw a variety of automatic weapons, hand guns, and explosive devices used raged for over an hour, resulting at least six people being wounded, while dozens of terrified shoppers were left scrambling for cover on an overhead walkway in between the warring sides.

Although voting was largely uneventful on polling day, at Din Daeng angry voters who could not vote due to the closure of a polling station forced their way through police and district officials protecting the District Office to search for ballot boxes and ballot papers shouting “We want the election today!”

At Phaya Thai a group of middle-aged women disenfranchised by a closed polling station set up a defacto “polling booth” in front of the local police station.

While at first blush it might appear that the ruling party has gained in popularity, it needs to be remembered that the Democrat Party boycotted last weekend’s poll and in 2011 won 115 constituency seats and 44 party list seats, although most of its support is in Bangkok where voter turnout was poor, and in the nine southern provinces where voting could not proceed.

Under Thailand’s election law a candidate in a constituency without a second candidate must win 20 per cent more votes than the number of “none of the above” votes cast.

Caretaker Prime Minister Yingluk Shinawatra hailed the turn-out a vote for democracy and thanked those who made their way to the polls irrespective of how they voted, while Suthep Thaugsuban, secretary general of the so-called People’s Democratic Reform Committee (PDRC) vowed to continue his fight against the government and step up his so-far failed campaign to shutdown government ministries.

With less than the minimum 95 per cent of MPs elected last weekend the 2014 Thailand general election has done nothing to stabilize Thailand’s political landscape.

The Democrat Party is said to be considering four legal challenges against the caretaker government, including that voting in the 2014 Thailand general election did not take place simultaneously throughout the kingdom, despite the fact that it was protests by it that prevented it.

It is also in the process of preparing a petition to the National Anti-Corruption Commission (NACC) seeking the impeachment of Ms Shinawatra and the caretaker cabinet.  In addition it has filed a complaint with the Office of the Ombudsman requesting the Constitutional Court nullify the February 2 poll, and another asking the Constitutional Court to dissolve PTP for taking advantage of political rivals in the election.

On its part the ruling party has filed a petition with the Election Commission chairman seeking the dissolution of the Democrat Party for failing to fulfill the duties of a political party as defined by Section 94 of the Political Party Act.

With the caretaker government severely restricted in what it can and can’t do, the looming question is for how long Southeast Asia’s second largest economy can continue without a fully empowered parliament and government to guide it.

* There was no voting in Phatthalung, Phuket, Ranong, Phang Nga, Krabi, Trang, Chumphon, Songkhla and Surat Thani where candidates had been prevented from registering by anti-government PDRC protesters. Voter numbers have not included in the total 2014 Thailand general election electorate pool.

A similar version of this story was published in The Establishment Post on February 14, 2010 as 2014 Thailand election in photos