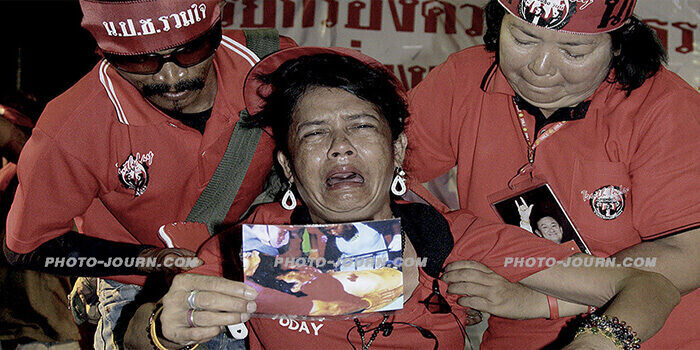 Less than 24-hours after Thailand Prime Minister Abhisit Vejjajiva removed the state of emergency decree for Bangkok and five other Thai provinces, red-shirt pro-democracy supporters have rallied at Sanam Luang, a traditional political rallying ground in the center of Bangkok directly in front of Thailand’s Grand Palace.

With the majority of its leadership behind bars and 27 others evading arrest warrants, what has been termed the next generation in red-shirt leadership addressed a gathering estimated to exceed 8,000 people on Saturday (April 25, 2009).

The new leaders admitted that the mass rally tactics of the past were a mistake and vowed to hold regular pro-democracy rallies in Bangkok and throughout provincial Thailand in the months ahead.

The leaders promised to continue the aims of the previous leadership in pursuing electoral reform, a change to the 2006 military imposed Constitution, and the downfall of the Democrat lead government of Mr Vejjajiva.

Unlike the mass rally that was staged at Government House a little over two weeks ago, there were no convoys of buses from the provinces, with those attending coming primarily from the suburbs of Bangkok. Neither was there any phone-in or video-call from fugitive, former prime minister Thaksin Shinawatra.

The rally remained peaceful and attendees were largely festive, while remaining defiant to the government as the new red-shirt leaders spoke.

When video clips collected by the United Front for Democracy Against Dictatorship (UDD) showing clashes between the red-shirts and Thai military on April 13 were displayed a hush fell over the gathering as people watched the graphic footage in stunned silence.

Red-shirt leaders repeated their accusation that a number of people were killed by the Thai army at Din Daeng and their bodies spirited away and secretly disposed of, a charge the Royal Thai Army and the Government has constantly denied. (See: Monk – I saw Thai army shoot monk and people shot at Din Daeng)

Towards the later part of the evening reports were received of members of the mysterious “blue-shirt” movement circling the meeting ground on motorbikes. Later one blue-shirt member was apprehended by red-shirt guards‚ and found to be in possession of a flare pistol that had been converted to fire shotgun cartridges.

The blue-shirts first appeared on the Thailand political scene on April 11, when red-shirt protesters rallied outside, and later invaded, the Asean plus six conference at Pattaya, forcing the heads of state of the 10 Asean countries and those of neighboring dialogue-party countries to flee and the summit postponed. (See: Thailand Prime Minister dead man walking as Asean leaders flee Pattaya)

Unlike the People’s Alliance for Democracy (PAD) protests where undercover police were publicly humiliated, paraded onstage, abused and assaulted when detected amongst protesters occupying both of Bangkok’s airports, red-shirt guards disarmed the man and protected him from rally attendees before quietly taking him to the police.

At the same time a fugitive key protest leader from the earlier protests, Jakrapob Penkair, is alleged to have told the BBC that the red-shirt movement planned to drive the Abhisit Vejjajiva government out of office, was not dead, but rather would come back even fiercer, including adopting guerrilla tactics if necessary to achieve its goal.

“I believe the room for unarmed and non-violent means to resolve Thailand’s problem is getting smaller every day”, he is reportedly told the BBC by phone from an undisclosed location where he claims to be setting up a base for ongoing red-shirt activity.

Different tactics would be used to confront the government, including possible clandestine subversion or armed attacks, he said.

Mr Penkair said that the struggle to bring down the present administration would continue, but the red-shirts would no longer rely on conventional forms of protest. These last comments are the same as what the current next generation of leaders told those present on Saturday.

The comments by Mr Penkair prompted Foreign Minister Kasit Piromya, who took an active role in the PAD protests and who complimented protesters on seizing and closing Bangkok’s airports, to accuse Thaksin of plotting to “rub out” his enemies in an effort to return to power.

Thaksin has resorted to some sort of assassination attempt … [as] a last resort… Thaksin is fighting to the death”, he said in a speech to the Asia Society in New York.

Meanwhile, the son of Mr Limthongkul, founder of the Manager Newspaper Group and pro-PAD television station ASTV, who was shot and wounded by gunmen armed with M16 and AK-47 assault rifles last week, accused an underground movement comprising senior police and military of being behind the attack.

Jittanart Limthongkul claimed a Gestapo state is being formed and the “new power group” is putting up a military barrier on the outer ring to prevent Thaksin from returning, while blocking Abhisit with an inner ring.

Mr Jittanart said the incident at the Interior Ministry last week when rampaging red-shirts attacked a vehicle containing Mr Vejjajiva, was the work of this group, with the intention being “to kill the prime minister and put the blame on the red-shirts”.

According to Mr Jittanart the group is creating conditions for the dissolution of the House… [and] plotting a coup so that the police and military officers involved can take control.

The commander-in-chief of the Royal Thai Army, General Anupong Paojinda, confirmed last week that some shell casings found at the scene of Mr Limthongkul’s shooting were engraved with the initials of the Royal Thai Army (RTA) and that the serial numbers showed they had been distributed to the 9th Infantry Division, a unit of the First Army region in tambon Lat Ya in Kanchanaburi’s Muang district.

The comments by Mr Jittanart echo similar comments made by Mr Penkair last week that army commandos or military officials disguised as red-shirt protesters were behind the rioting and burning of buses on April 13 and at the interior ministry.

It was not us getting out of control. It was the third hand interfering. It was designed to be chaos. We were painted as troublemakers in order to have legitimacy to crack down, he reportedly told a foreign news service.

The apprehension of an armed member of the blue-shirts at the UDD rally on Saturday would tend to add credibility to the claims of both sides of a third hand at play in the Thai political scene.

The accusations might also explain why the state-of-emergency declaration imposed by Mr Vejjajiva remains in place well after the majority of red-shirt protesters from Government House have packed up their placards and foot clappers and returned home following the April 13 military crackdown.

Last week Kasikorn Research Centre (KRC) predicted the ongoing political turmoil in Thailand would cost the Thai tourism industry between Bt50 and Bt100 billion (about $US1.4 to $2.8 billion) in lost revenue.

According to KRC, if the political turbulence ends quickly the losses could be limited to about Bt50 billion but if the situation remained unstable the losses could easily double this figure.

The KRC forecast echoed a similar conclusion reached by the Tourism Council of Thailand (TCT) who last week said revenue from foreign tourism arrivals could drop 35 per cent this year.

Deputy government spokesman, Vachara Kannikar said late last week that the TCT had urged the government to take urgent steps to prevent an estimated 275,000 industry job losses as a result of inbound tourism figures dropping from 14.1 million in 2008, to an expected 10.9 million this year.