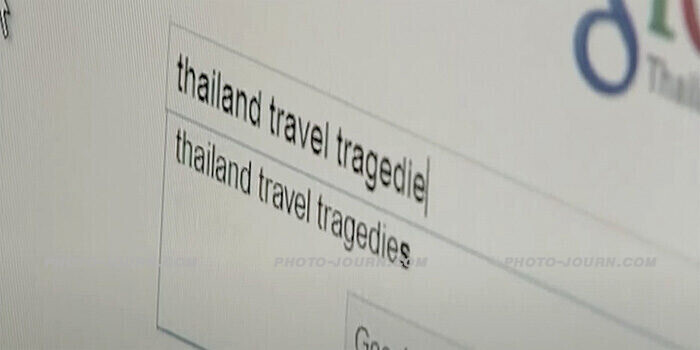 Known internationally as the land of smiles (LOS), a new website that went live today is sure to wipe the smiles off the faces of the people at the Tourism Authority of Thailand (TAT) when they return from the Songkran holidays.

Thailand Travel Tragedies has been set up to “list all occurrences of fatalities or serious illness contracted [by foreigners] while visiting Thailand”, and is actively soliciting contributions from anyone with Thailand holiday fatality or serious injury tales to tell.

The idea for the website evolved following the death from an as yet unexplained reason of 23-year-old New Zealand backpacker, Sarah Carter, in Chiang Mai earlier this year,

Ms Carter is one of at least seven known deaths to have occurred earlier this year in the Northern Thailand city, with all having the Downtown Inn located in the Night Bazaar section of the city as a common factor.

The names and the dates of death of people known to have either died at, or shortly after staying at the Downtown Inn in Chiang Mai are:

That’s an average of one death a week over a two month period in January and February of 2011.

While people dying in hotels is not a phenomena, it’s doubtful if any other hotel in the world, apart from the Downtown Inn in Chiang Mai, has ever had such a run of guest deaths in such a short period of time before.

Adding to the frustration of the relatives of the dead is the inability for the Thailand Government to come up with a plausible explanation for the deaths, with Chiang Mai Provincial governor, Mom Luang Panadda Diskul, being so insensitive as to describe the deaths as “a coincidence”.

Theories as to the cause of death for so many people at one Chiang Mai hotel abound amongst Thailand observers, the expatriate community particularly excelling in the ludicrousness of some.

That the owner of The Downtown Inn, former Chiang Mai mayor Boonlert Buranupakorn, is also reported to be the owner of several other hotels in Chiang Mai, in addition to shopping centers and a chain of high profile local restaurants, therefore making him extremely influential, is adding as much fuel to the cover-up claim as the inability of Thailand forensic specialists to identify the causes.

Throughout the website, Thailand Travel Tragedies uses the word “coverup”, a term also bandied about by many other people writing on The Downtown Inn Chiang Mai tourist deaths, but says it “is not the aim of this site to discredit Thailand, but rather to provide a forum for recording tragedies that may otherwise have been covered-up”.

While some websites report little is being done to ascertain the cause of the deaths, the Chiang Mai Department of Disease Control (DDC) has asked for assistance from the World Health Organisation (WHO), as well as liaised with the US Center for Disease Control (US-CDC), International Health Regulations (IHR) authorities, and also invited officials from the American, French, and New Zealand embassies to be part of the investigation.

A report, Myocarditis cases in Chiangmai, published by the DDC public relations office and posted on its website in the Academic Center section and updated on March 11, 2011 describes the actions taken by the DDC, along with a brief report on postmortem investigations.

“The joint investigation team found four clinically-confirmed cases of myocarditis (inflammation of the heart muscle) and another two patients with mild symptoms. These six patients were among three separate groups of tourists visiting Chiang Mai, Thailand, between 9 January and 4 February 2011. All were young women aged 23-33 years and were from the United States (1), Canada (1), France (2) and New Zealand (3).

“Of these six patients three died (one each from the USA, France and New Zealand). Five of them became ill while visiting Chiang Mai and one developed symptoms three days before arriving there. Common features of the illness among these patients include vomiting without diarrhea and lack of respiratory symptoms. One patient had a fever but all others were afebrile.”

Tissue samples have also been sent overseas at the request of family members of the dead, who wish to organise independent pathological exams on the samples.

In its own report the DDC acknowledges, “four cases [of myocarditis] among young healthy adults in the same location is rare”, certainly giving the impression that Thai forensic specialists are genuinely baffled. Little wonder that lay-people, such as the families of those who have died in Chiang Mai, are also having such a difficult time not knowing what killed their loved ones.

The open manner in which the deaths are discussed in the DDC report, tantamount to an admission that the Thai specialists can’t find an answer, is not the sort of report any government wants to issue, particularly Thailand, where loss of face is a major cultural issue. This in itself casts some reasonable doubt on claims of a cover up by the Thai authorities.

Though some people are drawing a link between the deaths of American tourist, Jill St Onge and Norwegian holiday-maker Julie Michelle Bergheim at The Laleena Guesthouse on Koh Phi Phi on May 6, 2009, the only similarity is that the cause of these deaths too, remains unexplained.

Until a plausible cause of death is established for each of these people, any civil or criminal legal proceedings are stalled, while frustrated relatives are left with the anguish of not knowing why their family member’s idyllic Southeast Asian holiday went so tragically wrong.

While the TAT will certainly not be happy with the appearance of the Thailand Travel Tragedies website, its emergence is a signal to Thailand authorities that Western visitors will not accept the same hollow explanations that the Thailand Government feeds to the local population. However, care will be needed in administering it to ensure accurate and full disclosure is made for all matters it publishes.