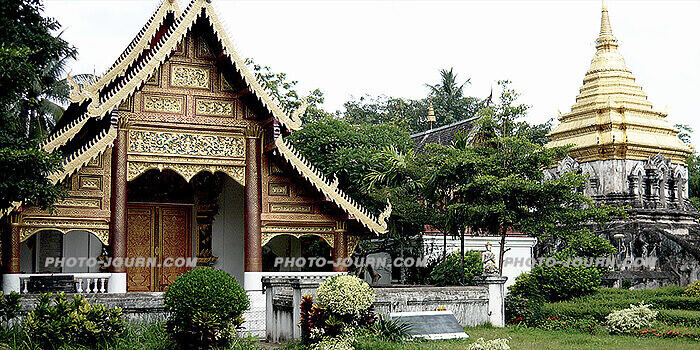 Situated about 700km (435 miles) north of Bangkok, Chiang Mai Province is the second largest of Thailand’s 76 provinces, while its capital, the city of Chiang Mai, capital of the former Kingdom of Lanna, is acknowledged as the seat of Theravada Buddhism in Northern Thailand.

Situated near the Chang Puek gate inside the city’s northern wall, the temple and its grounds are small, belying it’s important role in history. Though not on the traditional tourist trail, Wat Chiang Man houses two important Buddhist images – a marble bas-relief Buddha said to have come from Sri Lanka 2,000 years ago, and a crystal Buddha from Lopburi thought to be about 1,800-years-old.

The buildings surrounding the temple are all decorated in the Northern style, with red lacquer, gold leaf and many coloured mirrors, while the chedi (stupa) at the rear of the main prayer hall is lined with elephants cast out of plaster.

Situated on top of the towering 1,676 meter (about 5,500 foot) tall mountain known as Doi Suthep some 15km (about 9 miles) to the west of Chiang Mai City, Wat Phra That Doi Suthep is one of Thailand’s best known Buddhist temples and a major pilgrimage site for Thai Buddhists.

Dating back to 1383 when the first of it’s chedi’s was built, the temple’s importance is highlighted by the “Phra That” appellation incorporated to the temples name, signifying that a relic of the Lord Buddha – said to be part of the Lord Buddha’s shoulder bone – is held there.

According to legend, the site of Wat Phra That Doi Suthep was chosen by an elephant. The legend states that a Buddha relic from Wat Suan Dok self replicated and was placed on the back of a white elephant which was then allowed to roam at will. The elephant is said to have climbed to the peak of Doi Suthep, trumpeted three times, turned in a circle three times, and then knelt down and died. Rather than being seen as a bad omen, it was interpreted as an auspicious sign and the temple founded on the spot.

To reach this significant Chiang Mai temple visitors must first ascend a 309-step naga (dragon)-style staircase, or place their faith in a funicular cable-car running to the top. The temple has undergone significant changes since its construction and today the gold encased chedi and white elephant shrine are two of the temple’s most admired features.

Umong is the Thai word for tunnel and it is the maze-like network of tunnels running below this temple from which it draws its name. Built in the late 14th century, Wat Umong is situated in the foothills of Suthep mountain about 1Km south of Suthep Road, west of the canal.

Wat Umong was abandoned for a lengthy period of time and not occupied again until the 1940s. Today the monks at Wat Umong Suan Puthatham – not to be confused with Wat Umong Maha Thera Chan inside the old Chiang Mai City moat – live in an extremely natural setting and can often be seen feeding the free-range deer that live there, as well as the turtles and fish in the temple’s lake.

While the majority Chiang Mai’s earliest temples were built inside the fortified walls of the old city, some were also constructed outside. One such Buddhist temple is Wat Suan Dok, and it is from this temple that the Buddha relic that is said to have self replicated and placed on the back of a white elephant resulting in the site of Wat Phra That Doi Suthep is said to have originated.

Built by Lanna King Keu Na in 1383 on what is now Suthep Road, Wat Suan Dok (field of flowers in Thai) was established in what was then the gardens of the Lanna Royal Residence and its construction exhibits the unique sculpture, wood and glass mosaic work of the early Lanna Kingdom.

Visitors to Wat Suan Dok will find the temple grounds dominated by the large wiharn, or prayer hall, which unlike almost all others has open sides instead of enclosed walls. It is perhaps though the vast range of white-washed reliquaries behind the wiharn housing the cremated remains of past Lanna Kingdom rulers that draws the most attention from visitors.

It is also these royal remains, which pre-date the arrival of the Buddha relic, that prevent this important Chiang Mai temple from having the Phra That appellation incorporated in its name

Situated in the heart of the old city, Wat Phra Singh was constructed in 1345 and in 1935 had the title “Royal temple of the first grade” bestowed on it by King Rama IX.

The temple is renowned for the Phra Buddha Sihing statue housed inside, though in the second, smaller wiharn (prayer hall) and not the main, larger one, which legend states was brought from Sri Lanka and based on the lion of the Shakya statue in the Indian city of Bodh Gaya where the Lord Buddha, Gautama Buddha, attained nirvana (enlightenment).

The temple buildings feature classic Lanna Kingdom period architecture, with the walls decorated with murals illustrating Lanna customs, dress, and scenes, while its distinctive roof is meant to represent the wings of a bird.

These are just a few of the notable Buddhist temples in Chiang Mai. Visitors are welcome at all, but are reminded that appropriate clothes should be worn so as not to disturb the priests – long pants for men, modest tops and skirts for women and no bare shoulders.