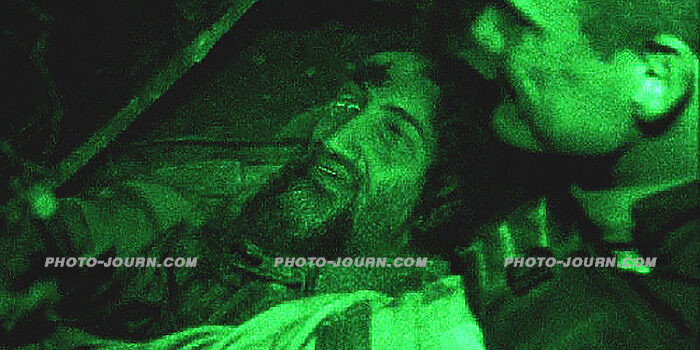 Is this photo purporting to show a dead dead Osama bin Laden a fake or real photo of the Saudi-born businessman and the world’s most wanted terrorist?

Late on the evening of Tuesday, May 3, 2011, image No1 was posted on LiveLeak purporting to be a leaked US administration photo of a dead Osama bin Laden being cradled in the hands of a US special forces soldier.

The photo ran with the caveat: “Note: Liveleak cannot confirm the authenticity of this Osama Bin Laden dead picture”

Internet observers quickly pointed out that reports from the White House had previously stated that Osama bin Laden had been killed by a single gunshot wound to the left eye, and Photo #1 clearly shows a wound above the right eye.

When the image purporting to be that of the dead Osama bin Laden is flipped horizontal nothing immediately looks out of the ordinary.

As some web commentators stated, one would expect better quality photos coming from the killing of Osama bin Laden. No doubt if he was still alive, Walter Cronkite would have been on the lead chopper.

Knowing that the White House watched the killing of Osama bin Laden live it is reasonable to suspect that any leaked image is likely at this early stage to be from the video feed. Stripping out the green “night vision” look produces Photo #3.

Photo #4 purporting to be that of a dead Osama bin Laden has had some minor enhancements to brightness, contrast and been increased in size marginally.

What do you think? Is this dead Osama bin Laden photo fake or real?

JLF: Early on the morning of Tuesday, May 4, 2011 the US CIA issued a warning to people not to open eMails purporting to contain attached photos of Osama bin Laden dead. EMails so titled often contain a computer virus.

130 Responses to "Leaked dead Osama bin Laden photo or not?"