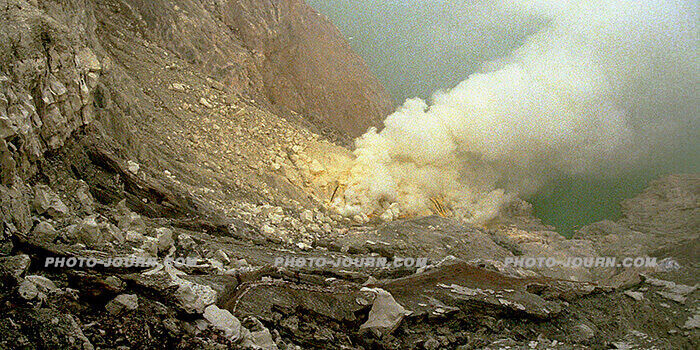 It’s been described as looking like hell on Earth, or the surface of the moon and both are right. Located on the border between Banyuwangi Regency and Bondowoso Regency of East Java, Indonesia, Mount Ijen volcano is home to one of the last active sulfur mines in the world.

With a diameter of some 722 metres (about 2,369 ft), the main crater (caldera) is home to a one-kilometre-wide (0.62 mi) turquoise-coloured lake caustic enough to dissolve metal, the largest acid lake on Earth.

The sulphuric gases and smoke rising out of the volcano have marred the rim of the crater, killing all vegetation for several hundred meters on the outside of the rim.

Just below the danger zone two wooden huts are home to the volcano manager and to the miners who descend into the pits of “hell on Earth’ each day to harvest  sulphur that ends up in pharmaceuticals, and fungicide and pesticides that are sold around the world.

Starting before dawn the men, who admit to being constantly weary from the daily routine, begin the trek up the outside of the rim, the landscape becoming grey and increasingly moonlike, fine dust particles flurrying with each step. A sign with a skull and crossbones and word “danger” in bright red a stark indicator of what lays ahead.

Descending into the crater involves following a rough “path” between rocky outcrops and giant pieces of rock that have been thrust to the Earth’s surface by past eruptions. The deeper into the bowls of Mt Ijen, the thicker the clouds of sulphur gas become.

As long as the gases continue to vent skywards, the men say, it is safe. If the winds cause the gas to stay inside the caldera it can become deadly, they add.

On the edge of Mount Ijen’s picturesque lake ceramic pipes have been laid out to channel sulphuric gas from deep inside the volcano, which condenses and oozes its way out of the pipes as deep red molten sulphur.

Once cool it takes on its characteristic bright yellow colour, which is what the miners target, hacking it into large blocks which they then load into bamboo carry baskets.

Once every man has his baskets loaded they begin the slow trek out of the crater and to the weighing station some three kilometres (1.9 mi) below, where the sulphur is sold to a local merchant for up to Rp50,00.

Carrying weights of up to 100 kilograms (220 lbs) the journey takes more than three hours, with getting out of the crater the most dangerous. Clouds of swirling sulphur smoke at times reduces visibility to zero, where a wrong step could be over the edge of a 30m (100 ft) or more drop.

After a quick rest and meal at the base of the mountain, the men return to the crater where they will attempt a second harvest, provided the wind isn’t keeping the smoke and gases inside the rim.

The constant exposure to the sulphuric gases and the heavy loads carried each day take a harsh toll on the miners, who roll off a list of men who have died over the years, or who can no longer manage the steep climb up the volcano or into the crater.

Aware of the toxicity, they shrug their shoulders and rhetorically ask what they can do? Harvesting sulphur is all they know and the money is better than farming, they say.