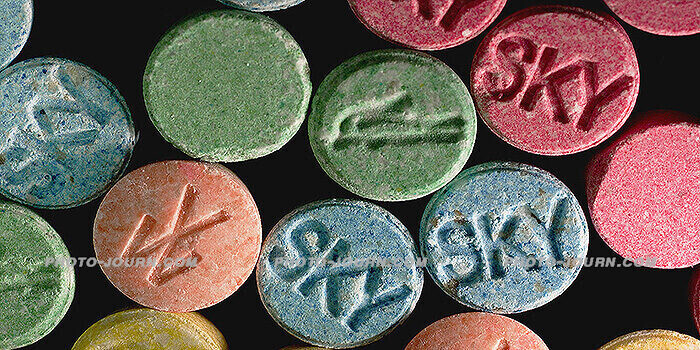 Club goers beware. If anyone offers to sell you a “Red Mitsubishi”, “Red Killer”, “Dr Death”, a yellow pill with a Euro (“€”) currency symbol embossed in it, or a pill that it unusually thicker than ones you are used to, just say no.

NSW police have renewed a warning issued earlier this year after a toxicology screen revealed the presence of the killer drug in the body of a 20-year old NSW man who died in Canberra last month.

According to information provided to the police, the man in the latest incident is reported to have taken a yellow coloured pill with a Euro (“€”) currency symbol stamped in it.

In the past reports of pills containing PMA have been referred to as “Red Mitsubishis”, while other street names include “Red Death”, “Mitsubishi Double Stack”, “Red Killer”, “Death”, and “Dr Death.”

Information provided to the NSW police have lead them to believe that the pill involved in the latest incident may have been sourced from NSW.

A toxicology test found a large amount of PMA in the body of Sydney northern beaches dance teacher Annabel Catt who died in February this year.

Detective Superintendent Newbery said, “a report from the Division of Analytical Laboratories has indicated the presence of PMA in a small number of tablet seizures made by police this year”.

A handful of PMA overdoses, one near fatal, occurred in Sydney in 2004. Six people died in South Australia in 1998, while at least three deaths have occurred in Queensland after people took PMA they thought was ecstasy.

Deaths have also been reported overseas with six people dying in September 2000 in Central Florida and nine people in Ontario, Canada in the the 1970’s.

PMA has similar effects to ecstasy. However, because PMA has a slower onset of effects, several deaths have occurred where individuals have taken a pill containing PMA, followed by a pill containing MDMA, or a second PMA pill, thinking that the first pill was not active.

More than one pill is considered by users as lethal, as it can cause irregular heart rate and heart attack. It can also cause breathing problems and/or pulmonary congestion as well as kidney failure, vomiting, convulsions, coma and or death.

In December 2004 Steven Lacey, a 19-year old from Keith in South Australia died after medical staff at Flinders Medical Centre (FMC) turned off his life-support-system after he collapsed as a result of a “Red Mitsubishi”.

His body overheated and went into “muscle meltdown” and hospital staff immersed him in ice to reduce his temperature.

According to his father his temperature soared to 42.2 degrees C, his organs melted, and he died. His father says that when he touched his son’s body a few hours later, he was still hot to the touch.

DanceSafe describes PMA as, “one of the most dangerous and toxic hallucinogens known.”

While DanceSafe also claims that all PMA pills so far discovered have been either tan or red in colour and considerably thicker than standard MDMA pills, photo’s from the US Drug Enforcement Administration (US-DEA) web-site show purple coloured PMA pills.

Club goers can screen for PMA, MDMA or a host of other adulterants in their pills using either the Mandelin or the Marquis Reagent testing kits available online from pillreports.

PMA is first reported to have began circulating in Australia in late 1994, 10 years after ecstasy first appeared on the local scene.

However, unlike ecstasy whose origins can be traced back to German chemist Anton Köllisch working for drug company Merck in 1912, little is known about the origins of PMA apart from it gradually emerging on the US scene in the 1970’s.

While the US Government, as part of the CIA and the Army’s chemical warfare investigations experimented with ecstasy as a truth serum in the 1950’s, the first reported recreational use of the drug was not noted until the 1960’s.

In the middle 1970s, ecstasy was rediscovered by the psychedelic therapy community and used as an adjunct to psychotherapy by psychiatrists and therapists.

Its original name for street sale was empathy, but was changed it to ecstasy because it sounded more marketable.

In 1984 its use started to spread quickly and US college students began to use it regularly. It was even available at bars in Texas.

Since it was not alcohol or nicotine, and could not have a patent applied to it, the US congress passed a law that allowed the DEA to immediately put a ban on any drug it saw as dangerous to public health.

The first item this was applied to was ecstasy and in June of 1985 it was declared illegal. This is despite His Honour Francis Young, the DEA’s Administrative Law Judge recommendation that physicians be permitted to continue to administer it to their patients.

Though psychiatrists had proven MDMA useful in their treatment, they did not have enough of a case to change the desires of the DEA. The judge recommended that the drug be placed on schedule 3, but it remained on Schedule 1, the most restrictive category, item.

When the rave culture began to pick up on the small Spanish island of Ibiza in 1987 the use of ecstasy as the preferred drug of rave and trance party goers really took off.

There are approximately twice as many deaths caused by PMA as by MDMA, even though the actual proportion of PMA on the market is only a fraction of that of MDMA.

Club goers are advised to only buy from trusted suppliers and to treat any new pills they come across suspiciously. Better yet, use at least a Mandelin reactant kit to ensure your pill does not contain PMA.

Ecstasy testing kits can be purchased by mail from the Pill Reports website.

Foreigners caned most in Malaysia (video)

One Response to "Killer PMA back in Aussie clubs"