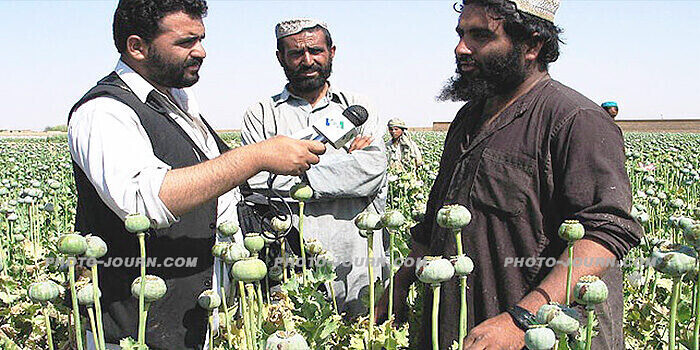 The Annual Opium Survey by the United Nations Office on Drugs and Crime (UNODC) says that opium production in Afghanistan has doubled in the last two years. The country is now the almost exclusive supplier of heroin to the world market, accounting for 93 per cent of global opium supply.

The report estimates the total annual opium harvest, which ended in July, at up to 9,000 tonnes, compared to 6,200 tonnes last year.

In addition, the total area devoted to opium farming increased by 17 per cent, from 165,000 hectares to 193,000 hectares, while the number of heroin processing labs had also increased.

Opium poppy cultivation gets out of control

This is despite the number of Afghanistan’s 34 provinces being opium free doubling to 13 in the last 12 months.

The survey claims the amount of Afghan land now devoted to growing opium is larger than the total area in Columbia, Peru and Bolivia for growing coca, the plant used as the raw material for cocaine.

In a statement accompanying the survey, the UNODC said the production of heroin “had soared to frightening record levels in 2007.”

According to the survey, 80 per cent of the opium was grown along the border with Pakistan, with the southern Afghanistan province of Helmand accounting for 48 per cent of production and now the world’s largest source of illicit drugs.

In fact, according to the survey, Helmand’s opium cultivation now exceeds the entire coca output of Columbia, the total cannabis output of Morocco and the total opium output of Myanmar.

It is estimated the farm value of this year’s opium crop is around US$1 billion, while the street value of the heroin produced from it is many times higher.

The UNODC report blames the increased opium harvest on corrupt officials in President Hamid Karzai’s government and casts doubt on the effectiveness of efforts by the United States and other Western countries to fight the cultivation.

It also warns that radical Islamic Taliban insurgents, which have links to Al-Qaeda, are profiting from the crop and providing protection for conveys of opium into neighbouring countries and using the money gained to buy weapons, fund logistics and pay salaries.

Antonio Maria Costa, executive director of the UNDOC, said the U.N. supports the Afghan government’s position, but added that crop eradication was a key element of any strategy to combat the trade.

He called on the international military forces operating in Afghanistan under the NATO (North Atlantic Treaty Organization) umbrella to help in the fight against opium – which they have so far refused to do.

“The opium economy of Afghanistan can be bankrupted by blocking the two-way flow of imported chemicals and exported drugs. In both instances materials are being moved across the southern border and nobody seems to take notice,” he said.

“Since drug trafficking and the insurgency live off each other, the foreign military forces operating in Afghanistan have a vested interest in supporting counter-narcotics operations. It would be an historic error to let Afghanistan collapse under the blows of drugs and insurgency,” he said.

A meeting in Brussels early next month will decide if NATO soldiers should be involved in the drugs fight.

However, London based international think-tank, the Senlis Council, said the report showed that counter-narcotics operations were making things worse.

Farmers were growing poppies because they lacked a profitable alternative, said the statement.

According to the UNODC report the gross income from a hectare of opium is US$4,600, compared to US$530 for wheat.

According to Costa, the Afghan government’s poppy eradication program should be undertaken “more honestly and more vigorously” and farmers choosing not to grow opium should be given rewards, such as new schools and hospitals.

“The situation is dramatic and getting worse by the day. No other country in the world has ever had such a large amount of farmland used for illegal activity, beside China 100 years ago when it was a major opium producer,” he said.

According to Costa there is a “tremendous amount of collusion” between traffickers and government officials. “It is clearly documented now that insurgents actively promote or allow and then take advantage of the cultivation, refining and the trafficking of opium,”

“The government has lost control of this territory because of the presence of the insurgents. Its benign tolerance of corruption is undermining the future: no country has ever built prosperity on crime,” Costa added.

The report adds pressure on President Karzai to consider new ways of curbing an expansion that threatens to turn Afghanistan into a “narco-state,” where some warn that groups such as Al-Qaeda could once again find sanctuary.

In the meantime the world is set to see the results of the UN and NATO forces failures in a glut of heroin in coming months.

The sheer magnitude of the crop is also likely to result in lower street prices and higher levels of purity of finished product, resulting in increased incidents of overdosing amongst users.