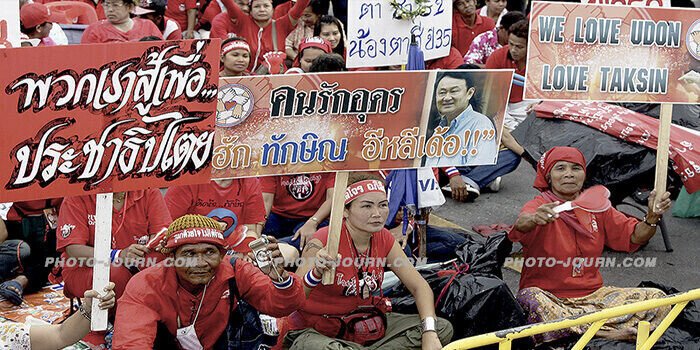 Tonight Thailand sits on the edge. After weeks of small-scale pro-democracy rallies throughout the country, a mass march and the surrounding of Government House by red-shirted pro-democracy protesters, and nightly video calls from deposed prime minister Thaksin Shinawatra, the day of political reckoning is almost here.

Dubbed D-Day by some, organisers of the latest round of protests expect more than 300,000 people to attend a mass pro-democracy rally at Government House in Bangkok with the aim of forcing the government to dissolve parliament and call fresh elections.

While Prime Minister Abhisit Veijajiva and senior government ministers have publicly dismissed the pro-democracy protests by the United Front for Democracy against Dictatorship (UDD) as being inconsequential, there are increasing signs the Democrat Party government of PM Veijajiva is more worried than it says.

The political protests in Thailand are a continuation of the unrest that culminated in hundreds of thousands of international tourists being stranded for almost two weeks last year when yellow-shirted People’s Alliance for Democracy (PAD) supporters seized and shut-down Bangkok’s two airports after first invading and seizing Government House for more than three months and closing a number of regional airports earlier on.

At the same time as the PAD were engaged in violent clashes with police and anti-PAD protesters, several senior members of the Democrat Party became leaders of the PAD, which at the height of the airport sieges said the only person they would accept as Prime Minister was Mr Veijajiva.

The PAD also openly called for an end to the current democratic election process in Thailand and heralded an era of new politics‚ where 70 per cent of the parliament would be appointed and only 30 per cent elected.

Attempts by the then ruling People’s Power Party (PPP) government to disperse protesters using Thai riot police in October last year resulted in a massive teargas barrage hospitalising more than 400 and killing two in what was labelled by many as bloody Bangkok.

The sieges ended when the Constitutional Court disbanded the PPP and two smaller political parties who formed the coalition government.

Amidst claims of behind the scenes pressure from Thailand’s powerful military headed by General Anupong Paojinda, a number of former government coalition members, including members of the PPP, switched sides enabling the Democrat Party led by Mr Veijajiva to form government.

In the last four months Mr Shinawatra, who skipped the country while on bail ahead of being convicted in absentia of corruption while in office, has moved from one country to another and infuriated the Bangkok establishment and elite by continually making video calls to mass rallies of his red-shirted supporters.

In calling for a mass pro-demoracy rally for tomorrow, Wednesday, April 8, Thaksin has said that should shooting break out, soldiers shoot at people, or a coup takes place, I will return and lead more protesters to Bangkok.

In earlier video calls Thaksin warned there could be a “revolution by the people” while other leaders of the protest, which is rapidly dividing Thailand along socio-economic lines, have raised the possibility of a civil war.

The struggle for democracy

Initially, England born and Eton Oxford educated Veijajiva, treated the pro-democracy protesters with disdain, however, in recent weeks the chestnut of Thai politics, defence of the monarchy, has been raised with the red shirts accused of everything from showing disrespect to Thailand’s revered King, to accusations they are attempting to destroy the royal institution, a charge Mr Shinawatra and protest organisers have strenuously denied.

While Prime Minister Veijajiva has continually played down the protests, various ministries and departments, as well as the military, have formed large teams of lawyers to monitor Mr Shinawatra’s video calls to see if they breach Thailand’s strict lèse-majesté laws.

The Government has also moved a number of regional Governors seen to be sympathetic to the pro-Thaksin/pro-democracy supporters, as well as instructed the new Governors to block protesters trying to head to Bangkok to join the rallies.

When UDD pro-democracy protesters rallied 13 days ago before marching to and encircling Government House, shipping containers were used to block access to the roads surrounding the complex and more than 6,000 police and soldiers deployed to ensure the grounds of Government House were not encroached upon by the protesters.

For their part the pro-democracy protesters have maintained an orderly protest, obeying police directions, allowing civil servants to enter and work in the Government House complex, and even painting over graffiti scrawled on the wall of Government House by over-enthusiastic supporters.

With the planned mass pro-democracy protest scheduled for Wednesday, PM Veijajiva took the unusual step of appearing on state-run NBT television on Monday night after the 8pm news programme to assure the public that authorities are “100 per cent” prepared for the rally.

“If the protest affects the political system and the country’s revered institutions, this government will not tolerate it and will take decisive actions allowed by law,” he said.

The claims of protecting the monarchy and the royal institution were a cornerstone of the PAD protests last year, with members of the PAD filmed holding photographs of the King while shooting at then pro-government supporters from the back of pick-up trucks.

Today, one day before the showdown, a group of people, calling themselves United Siam, comprising retired bureaucrats, senators, academics, business people, and General Somjet Bunthanom, one of the members of the Council for National Security formed after the September 2006 coup, offered a Bt1 million (about $US 28,200) bounty for the return of Mr Shinawatra, rumoured to have been recently sited in neighboring Cambodia.

According to the group, the offer is “aimed at preventing the country from falling into another crisis.”

The group repeated accusations that Mr Shinawatra and his red shirt supporters had insulted the monarchy, publicly and clandestinely and called on members of the public to rise up against the red shirts.

At the same time Democrat Party Senator, Somchai Sawangkarn, a member of the United Siam group, hauled out the communist card claiming, “some broken-hearted communists and politicians who lost their power” were part of the movement campaigning against the monarchy.

In Chiang Mai earlier today about 500 members of the Rak Chiang Mai 51 group left for Bangkok on 16 chartered buses and some vans after besieging the provincial transport office which had refused to allow private bus operators to transport the group.

They will join up with an estimated 2,500 pro-democracy supporters from the Northern Thailand province of Udon Thani, who also departed Tuesday morning aboard a fleet of 50 buses and tens of thousands of others being bused, trained and driven to the capital from all over Thailand.

Earlier today, Tuesday April 7, PM Veijajiva who was in Pattaya for a cabinet meeting ahead of an Association of Southeast Asian Nations (Asean) summit starting on Friday, was trapped inside a beach hotel by an estimated three hundred red-shirted protesters before his motorcade was blocked by protesters and pelted with plastic bottles and a motorcycle helmet smashed through the rear window.

The summit, which was postponed last December due to the PAD protests and airport closures, will involve the 10-members of Asean as well as regional dialogue partners China, Japan, South Korea, India, Australia and New Zealand, and discuss their follow-up to a G20 plan to lift the world out of recession.

The Pattaya summit is to be followed by a Global Dialogue in Bangkok on Sunday featuring United Nations Secretary General Ban Ki-Moon and the chiefs of the International Monetary Fund (IMF), World Bank and World Trade Organisation (WTO).

While Government officials are publicly stating they expect only 100,000 protesters at most, UDD organisers are sticking by their earlier prediction of 300,000.

Late Tuesday afternoon a core leader of the UDD, Nattawut Saikua, claimed police have prepared supplies of teargas and extracts from the trumpet creeper or cow-itch plant (Campsis radicans) to use against protesters.

Mr Saikua also said organisers were fearful a third party might try to provoke the red-shirted pro-democracy protesters or create an incident resulting in a clash with security forces. The fears come on top of recent comments by the PAD that they might reform and rally again in opposition to the UDD.

Whether 300,000 or 100,000 people rally is largely irrelevant. Today Thailand stands on the abyss. A country divided.

On one side is the urbanised, educated and affluent elite of Bangkok and the central and southern provinces, while on the other are the hundreds of thousands of Thais who have lost their jobs in recent months due to factory closures resulting from the global financial slump and a highly depressed tourism industry, and the country’s large and ever-present provincial working-class.

Whatever the outcome the ongoing political protests are likely to further detract from Thailand as a desirable tourism, retirement or investment destination.

The wild card in the deck, as always in Thailand, is the Thai military and what action they will take.

Having disposed of Mr Shinawatra in 2006 and believed by many to have played an active role in the formation of the present government, it is unlikely they will stand idly by and watch the prime ministership of Abhisit Veijajiva fall.

Either way, in less than 24-hours both sides will know where they stand. The larger the rally, the longer Thailand’s political unrest is likely to continue.