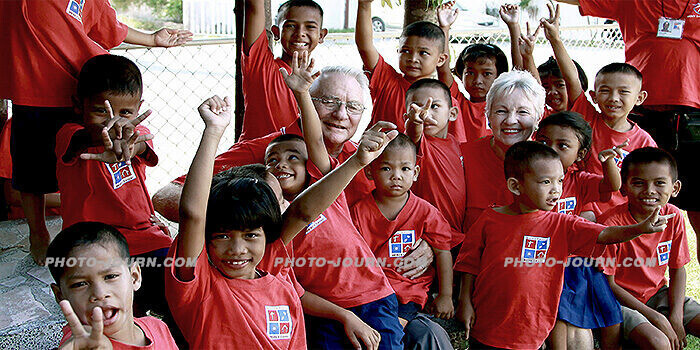 Pattaya City may have grown to become one of Thailand’s most recognised international tourist hotspots, but intermingled amongst the glittering lights, towering condominiums and wide selection of retail outlets lies a grimmer and less glamorous Pattaya; the city’s slums, for whom the bright lights and tourism industry mean next to nothing, apart from for those who scavenge amongst its refuse for a living.

Living in ramshackle accommodation on vacant plots of land, but hidden from the view of tourists by towering trees, these families and individuals eke out a subsistence living collecting recyclable goods or working as casual day labourers, while others survive on the generosity of others, being too old, frail, or ill to even forage.

This is a side of Thai society you won’t find depicted in the guidebooks and certainly not something the Tourism Authority of Thailand (TAT) would wish to have associated in any way with its “Amazing” anything tagline.

No running water, no electricity, no bathroom

With no running water, no electricity, no bathrooms, the living conditions in some of the slums of Pattaya can only be described as abysmal.

Though Pattaya’s poor might call their shelters “home”, the word has little to do with what the utterance conjures up in most people’s minds.

Living in shacks as crudely constructed as a few sheets of tin nailed to some timber off-cuts, with a discarded tarpaulin as a roof, comfort in the slums of Pattaya is measured by things such as whether there is a well to draw “fresh” water from, to whether heavy rain will see a river manifest where you are sleeping.

The uncertainty of tenure is a big problem, with instances in the past of construction crews arriving up out of the blue in the morning, giving the people living there just a few minutes to gather their belongings, before bulldozers levelled everything to make way for a new development project. If people weren’t present at the time, their humble structures were destroyed, along with any possessions they may have had.

For some of Pattaya’s poor life is a little more certain. Land owners might rent them space to erect a shelter, and even supply a light bulb, but when you are 70- or 80-years-old with no family and unable to even go foraging because of cataracts or other ailments, charges such as Bt600 (about US$18.80) per month is a lot of money.

For the past 13 years an unassuming Protestant preacher and his wife from Edmonton, Canada, the Reverend Fred Doell and Dianne, have brought a little relief to Pattaya’s poor, starting first with a children’s home.

Establishing the aptly named Mercy Center, what began as a desire to help orphaned children, has grown into a much larger operation, with the shelter now housing 17 orphaned, abandoned, or at-risk kids between 2 and 11-years-old, while a school scholarship program pays the uniform, transport and lunch-time meal costs of more than 160 children from the slums.

In addition, an outreach program into Pattaya’s slums provides small food parcels once a week to the poor, infirm and elderly – along the way showing the Pattaya’s poor that they are not forgotten and there is always hope.

The need for help continues to grow

Now requiring a staff of five to run, Fred said that even with him and his wife not drawing a salary, Mercy Center had costs of about Bt200,000 ($62,715) per month.

The outreach program also provides those living in the slums with mosquito nets, and other items to make their existence a little more comfortable, including basic building materials to renovate or construct sturdier dwellings. This is also funded by donations.

Without the invaluable help of Fred Doell and the Mercy Center staff and volunteers the accompanying photographs would have been very difficult to obtain.

A similar article and photos were first published on CNNGo on August 24, 2010.