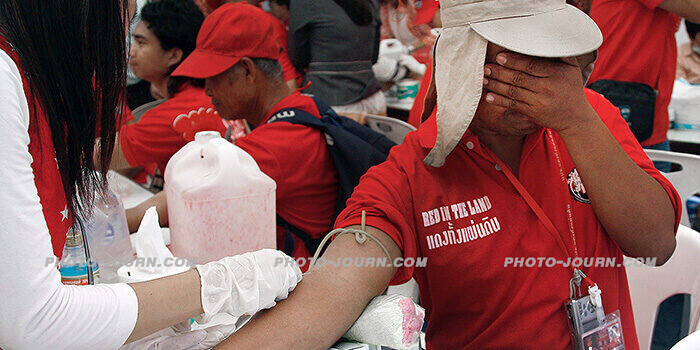 Tens of thousands of anti-government red-shirt protestors yesterday (March 16) lined up to donate blood on the fourth day of street rallies in Bangkok.

Organisers of the rally, which comprise multiple groups including supporters of disgraced fugitive former prime minister Thaksin Shinawatra, called for the supporters to donate blood as a symbolic sacrifice for democracy.

Organisers had aimed to collect “one million cubic centimetres” of blood, or about 1,000 litres (264 gal), which they then carried in a procession to the gates of Government House where some of it was spilled on the ground.

The remainder of the blood, according to protest leaders, will be taken to the home of Prime Minister Abhisit Vejjajiva.

Almost immediately after the blood was poured a team of medical cleanup personnel provided by the government wearing protective clothing hosed down and disinfected the site.

Nattawut Saikua, one of the protest leaders, said “when Abhisit (Prime Minister Vejjajiva) works in his office, he will be reminded that he is sitting on the people’s blood”.

Some 150,000 red-shirt protestors converged on the Thai capital on Sunday, with many circumventing road blocks and police and military checks at bus and train stations and travelling by boat down the Chao Phraya River from Ayutthaya.

Speaking to foreign media after the blood pouring ceremony government spokesman, Panitan Watanayagorn, said “if they want to throw it and have a photo op and have us clean it up later, I think it’s fine”.

The photos below are from activities throughout the day.