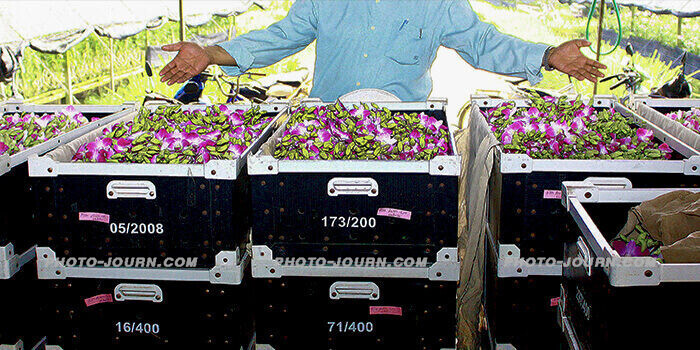 Climate change, global warming, La Nina and El Nino are all phrases that strike fear into the hearts and minds of anyone involved in agriculture or aquaculture and Thailand’s orchid growers are no exception.

With much of the country currently inundated by raging flood water and Chulalongkorn University and a Swedish environmental study centre forecasting the country will experience the metrological phenomena La Nina this year, orchid growers are keeping a close eye on things to ensure the county’s prized blooms remain unaffected.

In 2009 exports of Thailand’s tropical orchids topped more than $US80 million (Bt2.5 billion), with more than 24,000 metric tons of cut orchid flowers and more than 30,000 pellets/units of live orchid plants being shipped out of the kingdom – 77 per cent of all exported Thai floricultural products.

“The changing weather patterns is pushing the crops out of their ideal humidity and temperature ranges for optimal growth and also resulting in an increase in crop damaging insects. We try and use the minimal amount of pesticide as possible, but the increase in insects has forced us to increase the frequency with which we treat the plants.”

At Excel, the same as at other Thailand commercial orchid nurseries, the delicate and beautiful blooms are grown on old coconut husks sitting atop simple wooden platforms above the ground, their delicate velamen covered roots dangling in a contorted fashion towards the ground, safe from any flood waters except for something on a biblical scale.

In Pattaya though, Siriporn Pongsang, owner of Siriporn Orchids, a smaller boutique-style orchid nursery that supplies flowers for local consumption and also opens for tourists interested in viewing and buying a wide variety of orchid species, the situation is not the same.

While many of the orchids at Siriporn Orchids are also grown in coconut husks on simple wooden shelves, many taller species are grown on the ground.

Ms. Pongsang says the colder than usual weather this year, along with heavier than usual rainfall is a concern, delivering the plants too much water and delaying the blooming season.

“It’s been very wet and cold this year and that has meant we’ve had to take steps to increase drainage to protect the plants roots. Many people are not aware that orchids need only a small amount of water to bloom and too much water or cold weather can hurt them a lot,” she said.

While the prime blooming season for most Thailand orchids is August, in the northern provinces of Chiang Mai and Chiang Rai where native wild orchids have carved a particular reputation with orchid fanciers the world over due to the range of species and delicate, multi-hued blooms, the peak blooming season is traditionally during the cooler and wetter winter month of January.

With researchers predicting La Nina will cause a temperature drop of about two degrees celcius – primarily affecting the northern provinces – the regions unique and delicate wild orchids are expected to bloom slightly later next year, though the cooler weather is also expected to see the blooming period last longer.

According to Dr Setapong Lekawatana, director of Flower and Ornamental Plant Production Promotion Group, Bureau of Agricultural Commodities Promotion and Management, Department of Agricultural Extension, more than 3,500ha (about 8,600 acres) of land is used throughout the kingdom for orchid cultivation, with about 54 per cent of the crop being for export and the balance for local consumption.

Dr Lekawatana said the majority of the commercial orchid industry is located in and around Bangkok, with major nurseries in Chon Buri, Nonthaburi, Saphan Buri, Samut Sakhon, Ratchaburi, Kanchanaburi, Pathum Thani, and Ayutthaya.

“The way orchids are commercially grown in Thailand, on wooden platforms above the ground, means they are largely unaffected by heavy rain, though cold weather and increased insect populations caused by global warming and changes in temperature and humidity are starting to be noticed”.

According to Dr Setapong the most dominant crop grown in the kingdom for export is Dendrobium, which is particularly hardy, with Mokara, Oncidium, Aranthera, Aranda, Vanda, Arachnid, Renanthera, Ascocenda, Phalaenopsis, Cattleya and Paphiopedilum also grown in significant quantities for sale as cut-flowers and potted plants.

Breeders and fanciers a persistent threat

With Orchid farms shipping thousands of cases of fresh cut flowers daily to Bangkok for airfreighting to international markets, road closures due to flood are a concern as any delay will affect the vase life of cut flowers.

At Excel Orchid farm the major species grown is Dendrobium, with a wide range of colours and species having been developed over the years. Ms. Sanguthai said the wet weather being experienced in some parts of the country has not affected their shipments, with international customers continuing to enjoy a vase life of 10 to 12 days after arrival for standard varieties and at least 15 to 17 days for their premium varieties .

With more than 1,300 documented species Thailand is the largest exporter of tropical orchids in the world and second overall to the Netherlands, which specialises temperate species.

Though the last two years has seen a slight reduction in the quantity of Thai orchid exports due to the global economic climate, Ms. Sanguthai said this was being somewhat countered by increasing demand in new and emerging markets including China, India and Russia.

With thousands of people a year visiting Thailand to view the intricate shapes, sizes, colours and hues that range from pastel pinks and soft blues through to vibrant yellows and deep reds, a greater threat exists than climatic changes – that of unscrupulous breeders and fanciers.

Some will stop at nothing to get their hands on unique Thai orchid species and smuggling and theft from the wild has grown to such a problem that the Thailand government has enacted strict regulations prohibiting the sale, trade and/ or export of wild Thai orchids.

The threat of species becoming extinct as a result of illegal removal is so great that often when a new species or variety is discovered they are documented, confirmed and reported to the Orchid Society of Thailand and then all details of who discovered them and their location expunged from any public or private record.

From a fledgling industry that owes it’s beginnings to an unnamed foreigner working in the kingdom who introduced exotic root stock back in 1913 that captured the attention of the royal family via His Royal Highness Prince Paripatra Sukhumbhand, Prince of Nakhon Sawan Worapinit and which later spread to the general population, orchid cultivation in Thailand is today a blooming success with cuttings and plants found world-wide.