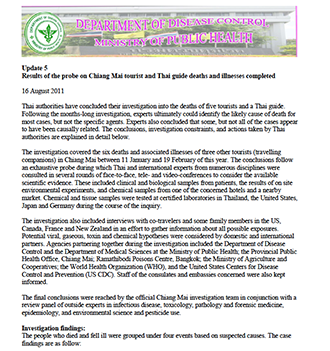 Improper handling of pathology samples and limited cooperation by relatives are blamed by Thailand authorities for scientists on four continents being unable to determine a causative agent or a¬†common factor linking the deaths of five tourists and a Thai tourist guide in the Northern City of Chiang Mai earlier this year.

After five months of investigation and thousands of laboratory tests the investigative panel formed to probe the Chiang Mai tourist death cluster yesterday handed down a report that raises more questions than it answers, while at the same time announcing a raft of new initiatives to protect the region and country’s precious tourism industry from dangers that it says weren’t responsible for the deaths of tourists in Chiang Mai earlier this year.

The investigation panel was established to examine the cause of deaths of:

A particular focus of the investigation was the Downtown Inn in the night market section of Chiang Mai City, where three of the deaths occurred (Sarah Carter was transported from the hotel and later died in hospital), and which other people who died were said to have had some casual contact with.

The deaths also saw the establishment of the Thailand Travel Tragedies website (See: Lost smiles in LOS as Thailand travel tragedies website goes live) by the family of dead New Zealander, Sarah Carter and more than a handful of accusations of a cover-up by Chiang Mai authorities, collusion, nepotism, malfeasance, and a whole raft of conspiracy theories ranging from toxic seaweed and poison puffer fish being sold as salmon, to a serial killer stalking Chiang Mai tourists and poisoning them.

All the while Chiang Mai provincial governor, Mom Luang Panadda Diskul, maintained the Chiang Mai tourist deaths were “a coincidence”.

In its fifth and presumably final report into the Chiang Mai tourist deaths, Thailand’s Department of Disease Control (DODC) said, “as most of the deceased were foreign nationals and there were no evidence of a criminal cause, their bodies were quickly turned over to relatives who took them home.

“Some relatives also did not want an autopsy to be performed, consequently biological samples were limited and in most cases were insufficient for the large number of tests that had to be considered and undertaken.

“Certain tests also require that samples be taken by a particular method and stored and transported in special containers. This was not possible because the need for testing for these toxic causes were not foreseen at the time of death.”

The report says more than 350 drug, chemical and organism tests were done on each fatality, with some 1,250 tests performed on samples taken from Ms Carter, in laboratories in Thailand and overseas.

The report said that although “experts ultimately could identify the likely cause of death for most cases”, the investigation was unable to identify a common factor linking all of the deaths, a causative agent, or how those tourists who died in Chiang Mai might have been exposed to it.

Regarding the deaths of Soraya Pandola and Sarah Carter, the investigation found ingestion of pesticides may have been to blame, though no traces of organophosphate (OP), organochlorine, or carbamate pesticides, such as chlorpyrifos, were found in the clinical specimens and blood test.

In the death of Ms Pandola, who did not stay at the Downtown Inn, the investigation found she died from myocardial injury (damage to the heart muscle), with the suspected agent that caused her death most likely to be chemical or biotoxin in nature.

“It is probable that it might have been a rodenticide. However, the exact agent could not be identified because the quantity of sample from the case was insufficient.”

While Ms Pandola and her companion may have become ill from the same causative agent, the report concludes that there is nothing to link the death of Ms Pandola to any of the other Chiang Mai tourist deaths.

In the death of the unnamed French woman, who also did not stay at the Downtown Inn and whose illness is said to have manifested before arriving in Chiang Mai, the cause of death was attributed to acute severe myocarditis due to a viral infection, rather than exposure to a poison, with laboratory tests in¬†Thailand and at the US-CDC finding “symptoms and inflammatory cells throughout her heart”.

In the deaths of Thai tour guide Waraporn Pungmahisiranon and Ms Carter, whose deaths occurred within three days of each other, the investigation found the likely cause of the illnesses and deaths of the two women, along with two other New Zealand tourists who got ill at the same time, is the same given the timing and the proximity of their rooms.

Though Ms Waraporn’s symptoms prior to her death are unknown, the report states the symptoms exhibited by the three New Zealand tourists, “can be explained by exposure to some chemicals, such as those found in pesticides which contain aluminum or zinc phosphide”.

Investigations of the two rooms the New Zealanders and Ms. Waraporn stayed in found aluminium molecules on carpet samples, though the report notes that aluminum is an ingredient in paint and air-conditioning cleaning fluids and that aluminum molecules were also found in other rooms sampled throughout in the hotel. (Ed: Aluminium is also an ingredient in many antiperspirants and deodorant body sprays).

Addressing the 60 Minutes “theory” that chlorpyrifos was to blame for the Chiang Mai tourist deaths, the reports states, “insecticides in the organophosphate, organochlorine and carbamate group, such as chlorpyrifos, are also unlikely to be the cause, because they conflict with clinical specimens and blood tests”.

In their letter to 60 Minutes disputing the imputation that chlorpyrifos was to blame, New Zealand’s three top¬† toxicology experts said all “OPs cause depression of acetylcholinesterase and as the bonding of OPs to this enzyme is chemical, regeneration of levels in blood can only arise from replacement of blood cells and this usually takes up to six weeks, so the depression would have been found” (See: War of words over Chiang Mai tourist deaths report).

The report also said tests at the US-CDC and German laboratories on samples from the three New Zealanders returned negative results for chemicals such as sodium monofluoroacetate (compound 1080) and phosphine gas, a widely used, cost effective, fumigant that does not leave residue on the stored product and which contains aluminium.