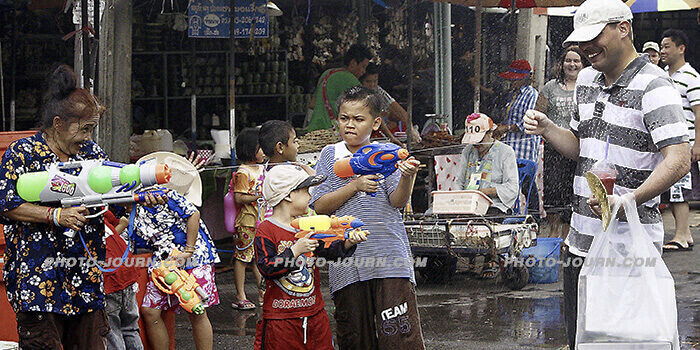 As Thailand races towards it’s globally recognised water festival, Songkran, heralding in of the Thai New Year, all indications are that the 2011 Songkran festival celebrations in Thailand will be the wettest for a long time, though not as a result of over enthusiastic celebrations.

While the rain, cold weather and winds which saw many of Thailand’s southern holiday islands evacuated of tourists and residents last week have passed, large amounts of land in the south remain submerged, with the country’s National Disaster Warning Centre (NDWC) warning people in the North and those in the South to be alert for mudslides and flash floods.

The Thai Meteorological Department (TMD) says a cold air system from China that crossed into Thailand yesterday, April 4 and today, April 5, will lower temperatures for the 2011 Songkran celebrations next week, with temperatures forecast to be around a mild 30C (86F), compared to the usual temperatures of around 40C (104F).

In Nakhon Si Thammarat where flooding has killed 22 people, the airport has reopened after inspections showed no damage had been caused to the runway, despite having been underwater for a week, while the Tha Sala hospital there has returned to delivering its normal standard of medical care.

In Surat Thani, where 10 people have been killed, seven hospitals are closed, with the Ministry of Public Health (MOPH) saying 104 primary care facilities and hospitals in the 10 flood affected southern provinces have been impacted.

As the death toll from the Thailand southern floods reached 53, fingers are already being pointed at illegal logging being to blame for much of the flash flooding, mudslides and destruction, with one former agricultural official blaming those encroaching on government land to clear and grow rubber and palm plantations as being at fault.

A particular irony is that in some areas the very thing that was pursued, rubber plantations and palm plantations, have been destroyed by mudslides, which have left both the previously farmed and encroached land unusable.

According to the Prime Ministers Office up to 580,000 homes have been affected by the floods, with the government approving a flood recovery assistance fund of Bt4.5 billion ($148.851 million) from budget reserves to provide each flooded home with a cash grant of Bt5,000 ($165.40) each.

The unseasonal heavy ray and cold weather couldn’t come at a worst time for most Thais, with most reasonably expecting to be spending this week preparing for the 2011 Songkran festival and accompanying celebrations.

Though the official celebrations take place on April 13, 14, and 15 this year, many Thais start heading home to their family homes this weekend, which saw absenteeism high for the two days leading up to the official holidays.

The word Songkran is Sanskrit and means the entry of the sun into any sign of the Zodiac, with its entry into the fire sign Aries, the Ram, behind termed Maha Songkran, or Major Songkran.

Ordinarily falling at the hottest time of the year, traditional Songkran activities include visiting temples to pray and give food to monks, with those performing the ritual believing it will bring prosperity and good luck for the New Year.

Still others make New Year resolutions, and just as in western countries, most are forgotten before the mental fog of the New Year celebrations having fully worn off.

Water warfare in the streets

While Thailand’s Ministry of Culture (MOC) might like to stress the religious and cultural activities that take part during the annual Songkran festival, the ancient Thai tradition of sprinkling a few drops of scented water onto the shoulder and slowly down the back of friends, relatives and acquaintances, has given way to all-out water warfare.

Nowhere is the annual Songkran water festival celebrated with more vigor than in the northern Thailand city of Chiang Mai, where the road around the moat surrounding the old city becomes a giant six lane traffic jam of pickup trucks.

Stocked with large barrels of ice water and as many relatives and friends as possible, wild water warfare is conducted with similarly laden vehicles as the traffic moves at as little as 5kph (3mph), with anyone luckless enough to have to pass through the area on a motorbike bearing the full brunt of water attacks from all side.

In the eastern seaboard city of Pattaya Songkran 2011 will be officially celebrated on April 19, with streets around the city being water battlegrounds commencing as early as the weekend of April 9 and 10.

For visitors in Thailand for the first time for the annual Songkran celebrations are advised to wear comfortable clothing that won’t spoil when it gets wet, while cameras, mobile phones and other sensitive electronic equipment should be protected by at least two plastic bands and several solid rubber bands.

Your guide to 2011 Songkran dates and events across Thailand