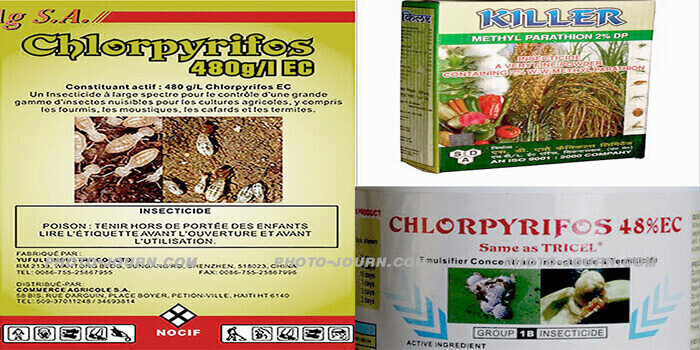 An investigation conducted by New Zealand’s 60 Minutes current affairs program titled To Die For has found high levels of chlorpyrifos pesticide in the Downtown Inn, the Chiang Mai hotel linked to the deaths of at least seven tourists earlier this year (See: Lost smiles in LOS as Thailand travel tragedies website goes live).

60 Minutes reporter Sarah Hall traveled to Chiang Mai and stayed at the Downtown Inn in the Night Bazaar section of the city and took swab samples from the hotel back to New Zealand for analysis, with further tests conducted in Italy.

First produced in 1965 by Dow Chemical Company, chlorpyrifos, an organophosphate, is a popular ingredient in flea collars and shampoo for dogs. It is also used in the manufacture of cockroach pesticides, termite treatment, and used widely in agricultural to keep large areas pest and insect free.

Effective as a pesticide, chlorpyrifos is readily absorbed into the skin by touch, or from inhaling contaminated air. Tests in the past have found high levels of chlorpyrifos remain in the air up to 24-hours after delivery, while a 1996 study found that chlorpyrifos resulted in birth defects in humans, particularly affecting the heart, palate, brain, and nerves.

The dangers of chlorpyrifos did not become apparent until the mid-1990s. At the time it was found Dow were in possession of 249 reports of chlorpyrifos poisoning that they had failed to forward to the US Environmental Protection Agency (USEPA), despite being honor bound to do so.

Dow was subsequently fined US$732,000 for not submitting the reports, was ordered to remove the “safe” description from its chlorpyrifos product Dursban, and were ordered to pay an additional $2 million penalty.

In 2001 ahead of looming regulatory action by the USEPA, Dow in the US withdrew registration of chlorpyrifos for use in residences and places where children could be exposed, and also restricted its use on crops.

However, the agreement reached with the USEPA only applies to the US market and Dow still actively sells chlorpyrifos internationally, particularly in developing countries such as India, where it is labeled safe for humans and animals – a blatant lie by the company.

Chlorpyrifos: easily ingested by the body

Categorised as a neurotoxin, ingestion causes a disruption in the transmission of nerve impulses, resulting in dizziness, headaches, loose motions, increased urination, and salivation. When the ingestion is excessive, it could lead to paralysis, convulsions, and even death.

While quickly absorbed by the body, chlorpyrifos only has a half-life of one day, perhaps explaining why forensic doctors in Thailand, along with other international agencies, have not been able to detect it in tissue samples and postmortem examinations conducted on the seven dead tourists.

It would also lay to rest accusations of a cover up made by the family of New Zealand tourist Sarah Carter, who died after staying at the Downtown Inn in Chiang Mai, on a website they set up titled Thailand Travel Tragedies. It might also put to rest the incessant claims of one Bangkok-based freelance journalist who has been particularly vitriolic in condemning the handling of the deaths by Thai authorities and the abundance of conspiracy theories dreamed up by some sections of the Thailand expatriate community.

In an interview published in The Dominion, United Nations scientist, Ron McDowall, said there was a strong likelihood Wellington woman Sarah Carter and at least six other people had died from excessive exposure to chlorpyrifos, which causes identical symptoms to those suffered by guests staying at, or visiting the Downtown Inn in Chiang Mai.

According to Dr McDowall, the fact that traces of chlorpyrifos were found three months after Carter’s death and after the room was cleaned suggested there was a high concentration when she was staying there.

“I think she has been killed by an overzealous sprayer who’s been acting on the instructions of the hotel owner to deal with bed bugs”, Dr McDowall said.

Dr McDowall said he had consulted with other experts in New Zealand and Italy and all agreed the likely cause of death of the seven was from excessive exposure to pest control chemicals.

Thailand police confirmed they are looking into the possibility the tourists were killed by over exposure to pest control chemicals and had already raided the pest control company used by the hotel.

Richard Carter, father of dead tourist Sarah Carter, said it was “good to get an answer” about how his daughter died, adding that “it’s pretty horrific that they have such low standards that this can happen”.

If chlorpyrifos can be proved to be linked to the deaths of the seven tourists in Chiang Mai the result will be a serious blow to the city’s tourism industry, as well as to the general tourism sector in Thailand until authorities announce what steps they will take to prevent lethal chemicals such as this being used in tourist accommodation areas, how it will be policed, and whether any criminal charges are laid.

Chlorpyrifos may also explain the deaths of American tourist, Jill St Onge and Norwegian holiday-maker, Julie Michelle Bergheim, at The Laleena Guesthouse on Koh Phi Ph on May 6, 2009. Postmortem examinations, including one in Norway, failed to determine the cause of death of Ms Bergheim.

It was not possible to obtain comments from Chiang Mai government officials or management of Downtown Inn in Chiang Mai due to today being Sunday. A response from Dow Chemical had not been received up to the time of publication.