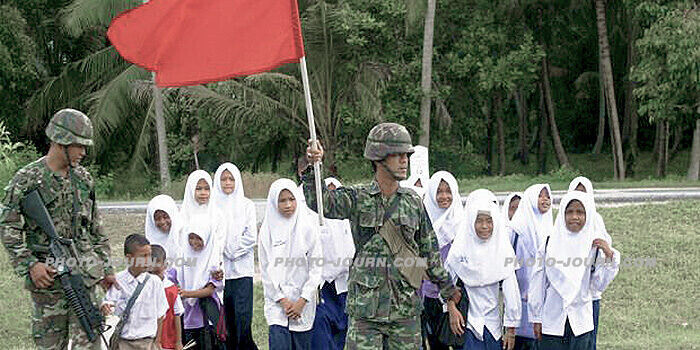 Thailand teachers have gone on strike closing 332 southern Thailand schools in the provinces of Pattani, Yala and Narathiwat in response to the shooting death of a female school director last Friday.

The closures are the latest reaction to the continuing violence in Thailand’s southern provinces, where the Thailand government has failed to successfully tackle a bloody long-running insurgency blamed on Malaysian Muslim extremists.

Ms Nanthana Kaewchan, 51, director of Ban Tha Kam Sam School in Nong Chik district, was shot dead by militants on November 22 just 100 meters away from the school she was the director of.

On Monday, November 26, three Thailand Army soldiers were wounded when five M79 grenades were fired into their base, next to the Bacho School in Bannang Sata district of Yala Province, with one grenade damage the roof of the school’s library building.

Earlier this month two teachers of Ban Ton Makham School in Pattani, were wounded by gunmen.

At a meeting today with Fourth Army commander Lieutenant General Udomchai Thamsarorat the striking teachers were told security would be adjusted, particularly in high-risk areas.

In July this year the Bangkok Post’s military writer Wassana Nanuam said the Fourth Military District were still using the GT200, a bogus “dowsing rod bomb detector”, while vernacular media quoted Royal Thai Army (RTA) chief, General Prayuth Chan-ocha, as saying the devices, purchased for about Bt800 million ($US252 million) had been withdrawn from use and stored.

More than than 5,300 people throughout the three provinces have been killed in eight years by what is said to be an ethno-nationalist campaign by Malay Muslims.

Thailand has flooded the three provinces in the past with up to 40,000 troops, but the surge made little inroads and teachers, soldiers, police and ordinary citizens remain subject to random acts of wanton violence including car bombs and motorcycle bombs.

A Bt350 million (about $US11.4 million) Sky Dragon airship purchased by the RTA with the intent of being a silent aerial surveillance and air support platform for ground troops lies flaccid in a hanger in Pattani, having flown on only a handful of occasions since it was delivered by Arial International about two years ago.

In September the RTA announced that repairs and upgrades valued at more than Bt50 million ($1.6 million) were needed to stop sum Bt300,000 ($9,800) worth of helium a month it was leaking.

The embedded (Warning: Extremely Graphic Content) video was released on Liveleaks last year and is said to show an entire family, including a 9-year-old boy, in Narathiwat district hanged or beheaded. The facts concerning the video have not been independently verified.

Apart from a few brief lines in Bangkok’s two English-language newspapers and almost nothing in Thai-language publications and media, little is reported on the crimes being committed in Thailand’s southern provinces, originally part of the independent sultanate of Patani until annexed in 1909 by Thailand as part of a treaty with Britain.