Gili Meno the honeymoon island… a perfect place for you, or two 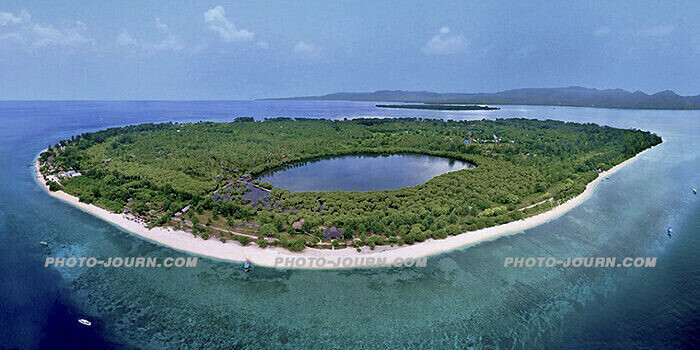 To most people the notion of a tropical island conjures up images of sandy beaches, crystal clear turquoise water, small clusters of bungalows nestled amongst towering coconut trees swaying in the wind and small alcoves where it is possible to spend time with someone special free of interruption.

For years the folks on Gili Trawangan, the self proclaimed party island of the three Gili’s off the north-west coast of Lombok, have referred to their nearest neighbour, Gili Meno, as the place to go if you want to imitate Robinson Crusoe, The Blue Lagoon, or Swiss Family Robinson (sans tree-house). In fact, up until a couple of years ago Gili Meno didn’t even have its own power generating station.

While the island now boasts 24-hour electricity, development has not accelerated at the same rate as it has on Gili Trawangan. Shady, sheltered alcoves leading up to white sandy beaches dissolving into clear turquoise coloured water still abound.

Unlike the large heavily developed central part of Gili Trawangan, the harbour area of Gili Meno stretches barely a few hundred metres before petering out into a meandering walking track that circumnavigates the island, weaving its way along the foreshore past numerous, but well spaced out bungalows.

Whereas most of the accommodation on Gili Trawangan is built from brick, most of the bungalows on Gili Meno are constructed from more traditional materials such as coconut poles, woven bamboo panels (bedek) and alang-alang (a type of woven grass) roofs.

This should not by any stretch of the imagination be interpreted as meaning the accommodation is rudimentary or lacking in creature comforts.

Rooms with air conditioning, hot water (if you must) and the ubiquitous western toilet and bath tubs are all available.

While the restaurants on Gili Meno offer a more limited range of food than the more commercialised eating houses found on Gili Trawangan, the meals are appetising and the dining very relaxed.

Snorkeling and diving are both well catered for on the island, while some of the local young men can often be found surfing the reef at the south-west end of the island.

A walk back from the beach into the kampung (village) reveals a spread out village that provides the local inhabitants with extremely low density living spread over gentle rolling plains punctuated by towering coconut trees dotted with grazing cows and goats.

As with all three of the Gili’s, everywhere a visitor walks they are greeted with the happy smiling faces of local children who all seem happy to just say “hello” before dissolving into shy bouts of laughter.

While the bars and nightclubs on Gili Trawangan are legendary for their parties and club like atmosphere, on Gili Meno the nights are considerably more sedate and perfectly suited to those wanting a more intimate and personal holiday.

And if things get too quiet, you can always catch the island hopping boat or charter your own across to Gili Trawangan for a night or two of partying and then return to the more peaceful and tranquil surrounds of Gili Meno to recover.