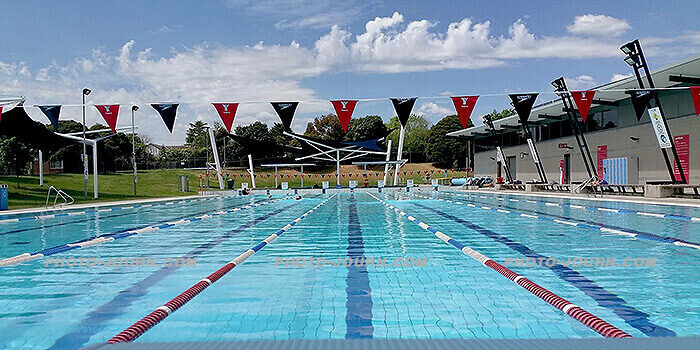 At the same time as the rest of the world searches for ways to reduce greenhouse gas emissions the City of Boroondara blissfully generates hundreds of thousands of kilograms a year keeping two outdoor swimming pools open during Melbourne’s winter months.

For the months of June, July, and August the council spent more than $25,000 and used more than 1.145 million megajoules of gas at the Boroondara Swimming Centre (BSC) in Belmore Rd Balwyn, and a comparable amount to heat the Hawthorn Aquatic and Leisure Centre a few kilometres away.

The gas used to keep the 2.5 million litres of water in each pool heated to a comfortable 27C produced more than 145 tonnes of greenhouse gases, equivalent to that produced by 36 mid sized cars in a year.

A further 14 tonnes of greenhouse gases were produced from the bank of 20, 1,000-watt floodlights that illuminate the generally empty BSC swimming pool for up to six hours each night.

A week after being asked for more details on each of the facilities Ms McFarlane was unable to provide figures on how many people used the two Boroondara swimming pools over the period, or how much gas and money was spent heating the nearby Hawthorn facility.

According to Ms McFarlane the questions were complicated and required in depth research and were not figures that were easily obtainable. She was also unaware if the City of Boroondara purchased green energy to heat the pool or purchased any carbon offsets for the energy used.

A local resident whose house overlooks the BSC but who asked not to be named said he would be surprised if there was more than 30 people a day on average using the pool during the winter months.

“The water must be pretty hot because in winter there is cloud of steam rising off it but there is never many people using it. It seems like a waste of gas and money being open.”

In addition, the resident said it is common for the floodlights illuminating the Balwyn North swimming pool to be left on until the early hours of the morning, even though the swimming pool is covered and not available for use from early in the evening.

“It’s absolutely ridiculous and very wasteful. They leave the lights on until 1 or 2 am and the pool is covered and no one walking around outside”, he said.

Mark Wakeham, energy spokesman for Greenpeace said the heating of one or two council run pools was significantly better than a lot of privately heated pools in peoples backyards though ideally they should be covered.

The Australian Conservation Foundation (ACF) urged the City of Boroondara to consider using solar heat pumps instead of the natural gas system currently in use.

The heating of the pool would appear to be at odds with claims on the City of Boroondara’s web page that, “the City of Boroondara is leading by example on environmental sustainability” with a “diverse range of actions to maintain our parks and gardens, conserve water and energy.”

With both sporting facilities charging $4.80 for a casual entry swim more than 5,000 people would have needed to use the swimming pools just to cover the cost of heating.

A cascade of tipping points looms

Earlier this week Dr Tim Flannery, a world recognised climate change scientist and the Australian of the Year in 2007 said a U.N. Intergovernmental Panel on Climate Change (IPCC) report due in November will show that greenhouse gases have already reached a dangerous level.

Dr Flannery said the report will show that greenhouse gases in the atmosphere in mid-2005 had reached a level not expected for another 10 years.

“What the report establishes is that the amount of greenhouse gas in the atmosphere is already above the threshold that could potentially cause dangerous climate change.”

Dr Flannery said reducing the amount of greenhouse gases being introduced into the atmosphere might not be enough to prevent irreversible climate change in 40 years time.

These views are similar to those expressed by the CSIRO (Commonwealth Scientific and Industrial Research Organisation) and the Bureau of Meteorology in a report titled Climate change in Australia it released last week.

The report predicts that as a result of greenhouse gases, temperatures in Australia are likely to rise by between 0.6¬∫C to 1.5¬∫C for most of Australia by the year 2030.

The report also predicts the average number of days per year above 35¬∞C in Melbourne will rise from the current nine to between 11 and 13, while Perth will go from 28 days a year currently to between 33 and 39 days.

The report also predicts a 10 per cent average drop in rainfall in the southern parts of Australia.

Coupled with hotter days and lower levels of moisture in the soil, the result will be a 20 per cent increase in the number of drought declared months by 2030.

In addition the report forecasts a decrease in snow cover, reduced snow season lengths and lower peak snow depths. Also predicted are increased winds in most coastal areas, and an increase in water temperature of between¬† 0.6¬† to 0.9¬∫C in the southern Tasman Sea and off the north-west coast and 0.3-0.6¬∫C elsewhere.

Given the grim predictions one has to ask whether the practice of heating outdoor swimming pools using hydrocarbon fuels in Melbourne over the winter months for the benefit of a handful of people is a luxury the environment cannot afford.