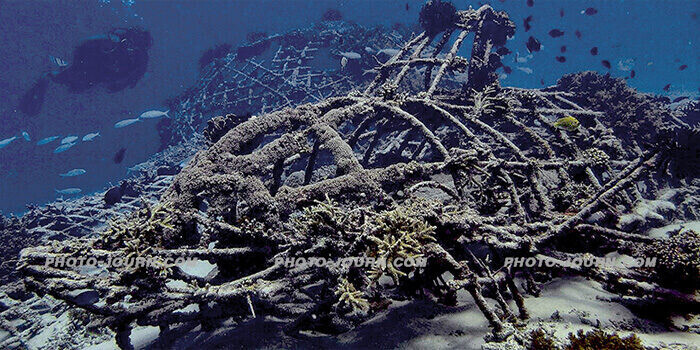 Every year divers from around the world head to Indonesia to explore the pristine waters surrounding the 16,000 islands forming the Indonesian archipelago.

While the island resort of Bali plays host to many of these tourists, along with Sumatra and Sumbawa, the three islands off the North-West tip of Lombok — Gili Air, Gili Meno and Gili Trawangan — have in the past also garnered a good reputation.

Known world-wide for exceptionally clear water and an area where visitors can see more varieties of fish, including giant manta rays, than any other location in the world, the three Gili’s host thousands of divers a year.

While fish species still abound in the area, the effects of el Nino in 2000, as well as the now banned practice of dynamite fishing, has in more recent times damaged much of the hard coral formations throughout the area.

In an attempt to return the water around the island back to its natural state, Villa Ombak Diving Academy on Gili Trawangan, in conjunction with a bio-engineering company, are encouraging rapid coral regrowth using 20th century technology.

A year ago Villa Ombak Diving Academy deployed the first of a planned series of electric reefs, or BioRock’s, in the waters in front of its diving school.

The BioRock consists of a steel cage on the ocean bead fed with a low voltage electric current designed to stimulate limestone formation through mineral accretion that attract microscopic coral polyps.

The installation gave Thomas Goreau, one of BioRock’s creators, the opportunity to inspect the results of the first installation.

According to Mr Goreau, the results are extremely good. After a year we have a five centimeter build up of limestone over the entire structure, while the coral fragments we attached to the first structure are well established and showing good growth.

To encourage a denser coral regrowth and improve rigidity the second BioRock had additional steel cross-members fitted to it. Within a few hours of being placed in eight meters (about 26ft) of water and having the current switched on it was already coated in a thin layer of white limestone powder, he said.

Over two days more than 200 coral fragments were collected by Villa Ombak diving school students and staff from local dive sites, which were then transplanted onto the new structure.

Mr Goreau said samples taken from the first BioRock would later be analysed to see how many naturally recruited coral polyps were contained in the limestone.

A Villa Ombak Diving Academy staff member who declined to be identified said the coral regrowth project is “extremely encouraging, with a range of fish species including lionfish, Indian walkman, blue spotted puffer fish, trigger fish and others adopting the BioRock as a new home”.

Because the BioRock’s are located in only eight metres of water the regrowth project is readily accessible by PADI open water certified divers, or even snorkelers.

At night the location of the two BioRocks is an interesting spectacle with the water above the two structures glowing a phosphorous haze.

While other diving schools on the three islands are monitoring the Villa Ombak experiment, none have as yet followed suit with similar projects.

With Villa Ombak already seeing solid results from the first BioRock, it should be only a matter of time before other diving schools in the area follow suit and invest in their industry, and the island’s, future.