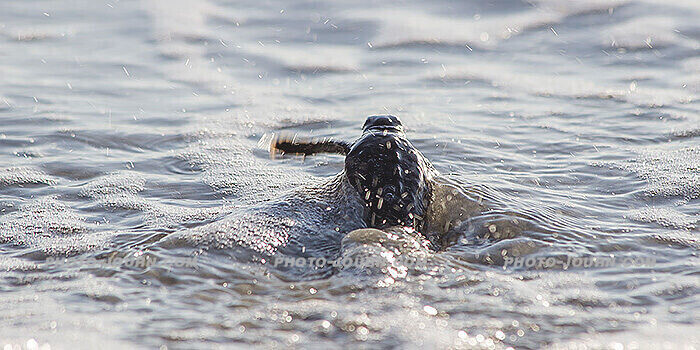 Animal conservation is not something usually associated with Asian countries, however, the forward looking views of a Lombok veterinarian almost five years ago has seen the turtle population around the northwest gilis (island in Bhasa Indonesia) of Gili Air, Gili Meno, and Gili Trawangan flourish to the levels they are now.

Over the years Dr Gde Sudiana, head of the department of Animal Services for West Lombok, estimates he has helped in the incubation and release of more than 3,000 turtles.

According to Dr Gde, in 1995 there were very few turtles in the waters around the three gili’s and after reading reports on their plight he and an English biologist friend started a small-scale breeding programme.

“We bought 50 eggs and buried them in sand and left them alone. It was very much a matter of trial and error and only about 30 per cent hatched. These we kept for six months feeding them a special diet based on fish and then released them at a quiet beach on Lombok opposite Gili Air.

Subsequent attempts saw more turtles being released, but a lack of funding has seen the programme end.

“The turtles must be kept for six months before being released and it costs around Rp30,000 (about US$3.00) per day in food for every 100 hatchings”, Dr Gde said.

While the turtle hatching programme ended several years ago, the results are now enjoyed by all visitors to the three islands, with snorkelers able to swim with turtles on all three islands almost every day.

Though not able to continue funding the programme from his own pocket, Dr Gde then turned his attention to the Rusa Timorense deer that once were common throughout Lombok.

Using some land he owned just outside of Mataram, Dr Gde commenced a conservation reserve with the aim of breeding and one day releasing into the wild the endangered species.

“Different people gave me deer that they found injured, or young deer who had no parents. From nine deer around four years ago, Dr. Gde today has 23.

In the near future he plans to release a pair of the deer on Gili Trawangan with the hopes that the two will start to establish a small herd of the species on the island.

While no funding is available for the conservation project, Dr Gde is seeking interest from people in establishing a trust to develop a larger scale breeding and release programme.