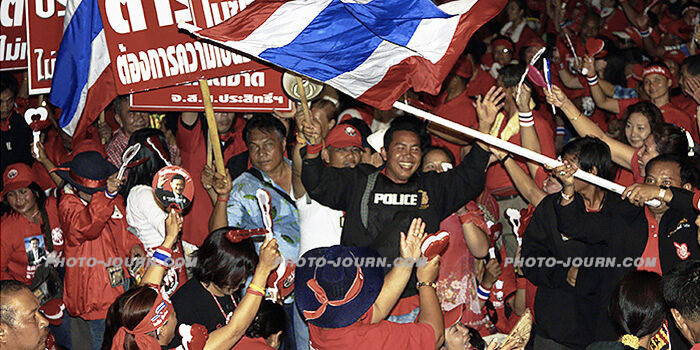 The breach of security saw nine of the foreign leaders, including Mr Veijajiva, flown by helicopter to a military base, before the protesters withdrew from the Royal Cliff Beach Resort, site of the 14th Asean Summit and Related Summits.

An earlier tense stand-off between the protesters and security forces was eased when an official from Asean came out of the hotel to accept a letter from one of the protest leaders, Arismun Tongreungrong. However, as the red-shirt protesters were withdrawing they were attacked by so-called “blue-shirts” wearing balaclavas or scarves and armed with clubs, bricks, slingshots, and smoke bombs.

Meanwhile, thousands of other United Front of Democracy Against Dictatorship (UDD) supporters poured into the main rally site around Thailand Government House over the weekend, swelling the numbers to an estimated 50,000 plus.

With the Thai military now on the streets red-shirt protesters extended their siege of Government House, blocking road intersections with government buses and erecting blockades at others.

At one point an army tank rammed several taxis blocking an intersection, but withdrew as protesters rallied. Late in the evening the first casualties began to be seen, the result of clashes with unidentified groups of people reportedly loitering around the edges of the red-shirt rally.