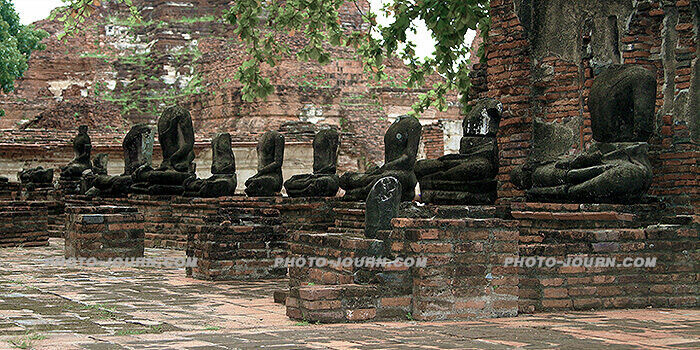 With a history dating back more than 2,000-years, visitors to Thailand are able to explore the country’s history in every province, with many currently under consideration for adding to the four locations already listed as Unesco World Heritage sites in Thailand.

The most significant of the Unesco World Heritage sites in Thailand was also Thailand’s first major archaeological site, and what many people believe to be Southeast Asia’s oldest civilisation, Baan Chiang.

Fibres of silk found at this historic Thailand site have been found to be more than 3,000-years old, while artefacts unearthed at the Baan Chan archaeological site show that by 3600BC the inhabitants had developed bronze tools and had begun to cultivate wet rice.

For visitors to Thailand staying in Bangkok the former capital city of Ayutthaya, just 76km north of Bangkok, provides easy access to one of Thailand’s most significant historic sites.

The Ayutthaya Historical Park contains the ruins of ancient Buddhist temples and royal palaces, a lasting tribute to the glory of the Ayutthaya empire, which held sway in the region for more than 400 years.

Pre-dating the Ayutthaya Historical Park is the ancient ruins of the Sukhothai empire. Listed as a Unesco World Heritage site in Thailand in 1991, visitors can see the well-restored ruins of ancient Thai royal palaces and buildings, Buddhist temples and figures, as well as the city gates, walls, moats, and the dyke control system.

Visitors to Thailand will find historic sites spread throughout Thailand’s 76 provinces, from the Northern reaches of Mae Sai and Nong Khai to the Southern-most region of Yala, historic sites are readily accessible and highlight the history and progression of the Thai nation.

The most recent Unesco World Heritage site in Thailand is the Dong Phayayen-Khao Yai Forest Complex comprising 230km between Ta Phraya National Park on the Cambodian border in the east, and Khao Yai National Park in the west.

Listed as a Thailand historic site of significance in 2005, this Unesco World Heritage site is home to 800 fauna species, including 112 species of mammals, 392 species of birds and 200 species of reptiles and amphibians.

This Unesco World Heritage site is internationally important for the conservation of globally threatened and endangered wildlife, including 1 critically endangered, 4 endangered and 19 vulnerable species.

While not a Unesco World Heritage site yet, visitors to Thailand with more of a Jurassic interest are finding the historic Isaan region provides close access to nine dinosaur digging sites in the Phu Wiang National Park.

When it comes to Thailand there is more than just beaches. Thailand’s Unesco World Heritage sites are amongst the most significant in the world and more historic sites are expected to be added in the future. More of what makes Thailand simply amazing.