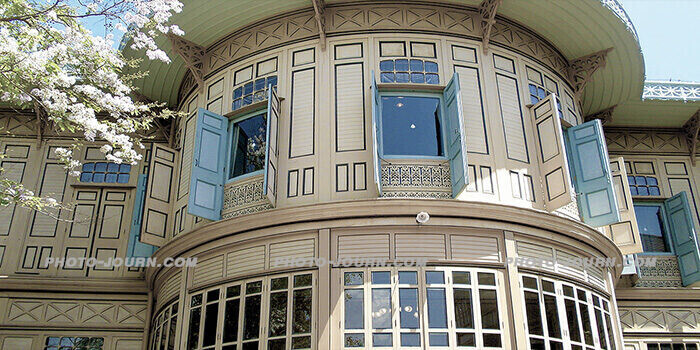 Built in the early 20th century by King Chulalongkorn (Rama V), Vimanmek Mansion, or Vimanmek Teak Palace as it is also known, is said to be the world’s largest teak wood building and today serves as a museum showcasing Thai heritage from the reign of King Rama V.

Located in Dusit Gardens, part of the Dusit Palace Complex near Dusit Zoo, the three-story golden teak building began its existence on the island of Kho Si Chang, a small island on the eastern coast of the Gulf of Thailand in Chon Buri Province as a summer palace for King Chulalongkorn and was constructed entirely without the use of any metal nails.

Due to security concerns resulting from one of the several confrontations over the years between Thailand and France, construction of Vimanmek Mansion was abandoned partway through 1893.

A few years later, as King Chulalongkorn was converting parts of the old city into a new Royal quarter, he recalled his abandoned teak mansion and ordered it to be dismantled and moved to its current location.

The relocation and reassembly was celebrated on March 27, 1901, and for five years the building served as the royal residence while Amphorn Satharn Villa, situated inside the grounds of the Bangkok Grand Palace, was built.

After King Chulalongkorn and his wives and concubines moved to Amphorn Satharn Villa a number of members of the royal family still resided at Vimanmek Teak Palace, however, by 1932 it had become little more than an 81-room storage facility used by the Royal Household Bureau.

Over the years this magnificent teak wood structure gradually deteriorated until in 1982, Queen Sirikit, sought approval from King Bhumibol Adulyadej (Rama IX) to restore it to its former glory and use it as a museum to commemorate King Rama V and to showcase Thai national heritage as part of the Royal Bicentennial Celebrations of Bangkok as a city.

From a single, three-story 81-room mansion, Vimanmek Teak Palace has grown to become a complex of more than 20 restored buildings – though not all are accessible to the public – under the catch-all description of the Dusit Palace Complex.

Visitors to Vimanmek Mansion will be guided through about 30 of the buildings’ rooms, and learn how this building was the first in Thailand to be fitted with electric lighting, as well as the first to have indoor plumbing.

Amongst the “treasures” to be seen are gilt cabinets flanked by great mounted ivory tusks, dressing-tables topped with vintage perfume-sprays, enameled bowls, Chinese porcelain, delicate crystal, Fabergé eggs, statues, ornate silk carpets, a dining room covered in crocodile skin, and even a collection of crockery with a different shade for each day of the week.
.
King Chulalongkorn is regarded as one of the greatest kings of Siam and a driving force in modernizing the country. His policies and acts are regarded as a primary reason Siam was never colonized and his eclectic interests are reflected in the rooms displayed to the public.

In one, a telescope still points skywards, in another is the first typewriter, a Remington, to ever reproduce the Thai alphabet, while in the Music Room, a hand-carved grand piano takes pride of place.

It is the likeness of King Chulalongkorn wearing a naval uniform and highlighting his legacy of abolishing slavery throughout Thailand, that is depicted on the back of the one hundred baht banknote

When Vimanmek Teak Palace was restored under the royal patronage of Queen Sirikit, great care was taken to follow the traditions and handicrafts of the craftsmen who originally constructed the building.

In rooms such as the Bronze Room on the second floor, the original paintwork still remains, showing virtually no deterioration, a lasting legacy to the artisans who performed the work.

Though Vimanmek Teak Mansion is regarded by many as the Dusit Palace Complexes primary attraction, there is plenty to see in the other lesser buildings, including: the White Elephant Museum, the Ananta Samakorn Throne Hall, the collection of Royal Carriages, and the Abhisek Dusit Throne Hall, to name just a few.

Admission to Vimanmek Teak Palace is Bt100 (about $US3) though those who visit the Grand Palace, Bangkok, first will be admitted free if they produce their original ticket within seven days of their Grand Palace visit.

Photography is forbidden inside any of the Dusit Palace Complex buildings, including Vimanmek Teak Palace. Modest clothing reflecting the royal nature of the buildings is required. Shoes must be removed prior to entering buildings. Your admission ticket must be shown prior to entering each building in the complex.

Vimanmek Teak Palace, Bangkok is best reached by taxi as the nearest Skytrain station, Phayathai, is a considerable walking distance away.