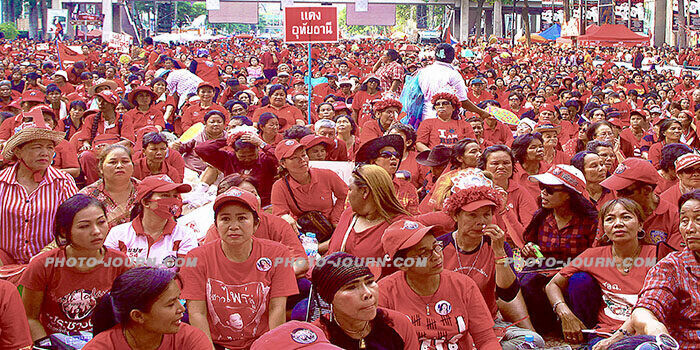 One year after the violent military crackdown against red-shirt anti-government protesters in the heart of the Bangkok business district more than 10,000 of the groups faithful gathered at the Ratchaprasong intersection today, May 19, 2011, to mark the deaths of more than 90 people last April and May.

Joining the gathering at the Ratchaprasong protest site were the families and loved-ones of those killed during the 69-day long protest which saw 92 people killed, including 11 soldiers and police and two foreign journalists, while another 1,800 sought treatment for injuries they sustained.

Particularly moving were the blank, expressionless stares of the young children of those killed, who for the past year have lived with the realisation that their fathers will not be walking through the door again to play with them, or give them the loving hug that children need and which only a parent can give.

Likewise the widows of those killed during the 2010 red-shirt protest have seen their lives change dramatically.

The token few baht handed out by the the opposition Pheu Thai Party (PTP) and the Royal Household Bureau long since spent on household necessities, in a country where inflation has skyrocketed from -.90 per cent in 2009 to an estimated 3.30 per cent last year.

Unlike members of the police force or military who were killed during the 2010 red-shirt protest, the widows, fatherless, and brother-less receive no ongoing government support. Some local red-shirt leaders from the provinces where people come from who were killed, such as Kwanchai Praipanna in Udon Thani, attempt to ease the burden as much as possible by hosting regular fund raising activities.

More than 117,923 bullets used against red-shirts

According to information released by the Government more than 117,923 bullets were used by the Royal Thai Army (RTA) during the 2010 red-shirt protest, of which 6,620 were “rubber bullets”, 2,120 were “sniper bullets”, and the remaining regular RTA issue rounds.

A preliminary report (Thai language only) by the (previously unheard of) Marginalised Monsoon Group on the violence between May 13 and May 20, 2010 found that 78 per cent of deaths were caused directly by gunshot wounds, with many others the indirect result of gunshot injuries.

Some  77 per cent of those killed sustained gunshot wounds to the head, neck, or chest, the report found.

Coinciding with the main action on the red-shirt Ratchaprasong stage, a separate group of red-shirt supporters joined with the families of the six people shot dead inside, or while attempting to get inside, Watt Pathum Vanaram.

Designated a safety zone after red-shirt leaders called off last years rally as the protest degenerated into a combat zone, RTA snipers were clearly visible on rooftops around the red-shirt main protest site, as well as at other burning barricades across the city.

Later, RTA soldiers were seen on the BTS overhead railway system, firing into the temple. The matter is indisputable. This correspondent was underneath a section of the BTS late in the evening and saw the muzzle flashes from shots being fired above him into the temple.

Despite several parallel running inquiries into the violence that accompanied the 2010 political protest in Bangkok, no one has been identified as being responsible for a single death.

Hampering any progress are those in the red-shirt camp who refuse to acknowledge armed elements were inside its barricaded area, while the RTA refuse to admit it deployed snipers, or that its troops shot dead unarmed civilians (not all of the casualties were part of the protest), despite there being ample photographic evidence to the contrary.

As with previous hard-line military crackdowns on political protests in Thailand, most notably the 1992 “Black May” protests when at least 52 people were killed, or the October 6, 1976 bloodbath at Thammasat University where the official death toll was 46, no one has expectations that any of these inquiries will produce the name of a single individual responsible for one death.

As in the past, Thai politics has shown a willingness to ensure the status-quo of power remains in the hands of a select few, while those who do the dirty work for those in power know they can act with impunity, their rewards coming by way of government contracts, military promotions, and parliamentary seats.