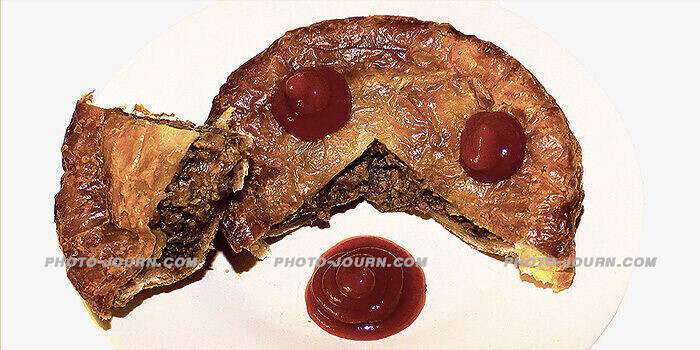 Traveling the world and experiencing different cultures and cuisine sounds all well and good, but it reaches a point for every fair dinkum Aussie traveler, not to mention long-term resident expatriate, when the last thing they want to see is another bowl of noodle soup or plate of rice – a time when nothing but a good ol’ Aussie meat pie will fill the bill.

Produced commercially as early as 1906 and mentioned in newspapers as early as 1850, the Australian meat pie is about as close to a national dish that Aussies can claim, after the pavlova was recently deemed to be a New Zealand creation by the Oxford English Dictionary.

Sold at sporting events, convenience stores, and school cafeterias, the Australian meat pie is almost a national staple, available 24-hours a day around the nation and proving to be the late-night hunger saviour of shift-workers and late night party people.

Comprising a shortcrust pastry case filled with a ground or cubed beef, or sometimes more exotic, filling and topped with a crown of puff pastry, the humble Australian meat pie has been the lunchtime fare and late night snack for millions, spurred the penning of countless newspaper columns, and even is even the basis of a national Aussie Meat Pie Competition, now in its 22nd year.

In 1976 a television commercial for General Motors Holden Australia adapted a US jingle for Chevrolet that used the line ‘baseball, hot dogs, apple pie and Chevrolet, replacing it with the line “football, meat pies, kangaroos and Holden cars” and the tune has spanned the generations since as a tongue-in-cheek iconic phrase that sums up Australia in just seven words.

Ask almost any Australian about their favourite Australian meat pie shop and you’re leaving yourself open to a lengthy discussion citing obscure rural bakeries from one end of the country to the other, detailing not only the best examples found, but also the worst.

For such a simple dish, the humble Australian meat pie is capable of generating more discussion than a multi-course banquet, with everything the size of meat chunks, thickness of the gravy and the texture of the pastry all deserving of detailed discussion.

Australian tourists to Thailand, or expatriate resident in need of an Australian meat pie fix now need look no further than the freezer section of their local Big C or Makro Cash & Carry supermarkets (and some Irish Bars), with Bangkok meat supplier Asia West Foods introducing a range of 250gm (about 0.5lb) pies, including an “Aussie meat pie”. Also available is a chicken and mushroom pie, a steak and mushroom pie and a steak and kidney pie for those seeking something more exotic.

Given the deep seated emotions and critique that anyone marketing an “Australian meat pie” in Thailand is likely to be subjected to, we purchased some of the Bt89 ($US2.95) pastries and put them to the test.

The first problem in providing a proper evaluation of whether an “Australian meat pie” sold in Thailand is a fare imitation of the real thing is the method used to heat them. Traditionally Australian meat pies are cooked and heated in a convection oven, the high heat melting the large amounts of fat used to make the pastry case, while also causing the flaky pastry top to dry and flake.

The scarcity of convection ovens in most Asian homes makes heating correctly problematic, with microwaves tending to turn even the best made pies into soggy, misshapen messes.

Those unfamiliar with microwave heating techniques get no suggestions from the manufacturer, with the “Aussie meat pie” packaging devoid of heating instructions, an obvious sign that the manufacturers believe anyone buying an “Australian meat pie” in Thailand is knowledgeable enough to heat the pastry encased meat parcels correctly.

The “Aussie meat pie” from Asia West Foods is supplied vacuum packed, with the pie itself sitting inside a second, inner plastic bag, with some obscure juice droplets also present.

To overcome heating situations that result in a pie casing developing the constancy of damp toilet paper, the correct method is to sit the pie on two sheets of absorbent paper, pierce the top of the pie in several places with a skewer or fork, and place another sheet of absorbent paper on top.

The pie should be heated for about three minutes in a 600w microwave oven, and then allowed to stand for four minutes, giving the cooking process time to stop and firming up the pastry.

After heating, the Asia West “Aussie meat pie” took on a darker, more yellow tinge, and despite standing for five minutes, the fats in the pastry refused to dry out sufficiently to a allow the pastry to firm up – indicative of the high fat and lard ratio used to make the shortcrust pastry case and which might provide a better result if heated in a convection oven.

The Asia West “Aussie meat pie” is jammed packed with ground beef (presumably, as no ingredient listing is provided), and a thick, slightly peppery gravy.

Despite the pastry being slightly soggy due to the steaming effect of microwave cooking, nothing could dispel from the rich tasting filling.

Aussie travelers and expatriate residents in search of a more exotic tasting “Aussie meat pie” in Thailand should also consider the Asia West steak and mushroom pie, which they will find chock full of hearty pieces of beef and sliced mushrooms, while the Asia West chicken and mushroom pie is no less disappointing, containing generous size pieces of fillet chicken, diced carrots and some obscure green leafy vegetable, in a thick Béchamel sauce.

Rounding out the product range is the Asia West steak and kidney pie, which is packed full of generous pieces of tender beefsteak and large cuts of kidney, in a rich, aromatic gravy with a liberal sprinkling of course ground pepper.

Though zap and flash microwave cooking is not the way any meat pie manufacturer would recommend for heating, for world-weary Aussie travelers and expatriates in search of a fair dinkum “Aussie meat pie” in Thailand, there are few choices and often the results are very disappointing.

Though a little less fat, or a change in what is being used, in the pastry mix could well see the microwave quality improve, without unduly affecting the results from convection oven heating, for anyone who can’t stand to look at another bowl of soup or plate of rice, the Asia West “Aussie meat pie” is a more than acceptable choice, scoring about an 8.0 out of 10 by Australian meat pie standards.

To truly experience the Asia West “Aussie meat pie” in Thailand at its best, we recommend trying one of the Thailand restaurants listed on the company’s website as offering this classic Australian dish, which we presume will be heated in a convection oven.

Disclosure: No direct or indirect compensation was made, received or solicited for this article. We paid for own pies.