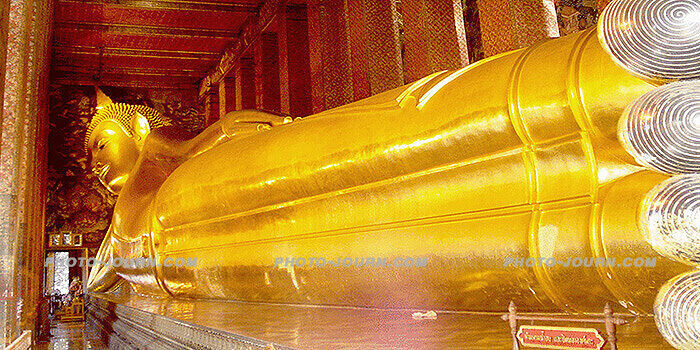 Wat Phra Chetuphon Wimon Mangkhlaram Ratchaworamahawihan – the Temple of the Reclining Buddha (Phra Buddhasaiyas) – or Wat Pho/Po as it was formerly known, is one of the oldest and largest temples (wats) in central Bangkok – predating the city itself under its former name of Wat Potaram (Wat Po/Pho).

The temple is located directly adjacent to the Grand Palace and comprises two compounds bisected by Soi Chetuphon, with a total area of 8ha (almost 20 acres).

The northern walled compound is open to the public and houses the Reclining Buddha, the temples traditional massage school and more than 1,000 Buddha Images, while the southern walled compound, Tukgawee, is a working Buddhist monastery with monks in residence and a school.

Measuring 46 meters (151ft) long, 15 meters (49ft) high and decorated with gold leaf on its body, mother of pearl eyes and on the soles of its feet, the Reclining Buddha is what draws most tourists to this central Bangkok temple.

While the 108 auspicious Chinese and Indian signs depicting a true Buddha on the soles of the statues feet are impressive, so to are the 95 chedis – square shaped as opposed to the round shape generally used – spread throughout the complex.

The four largest chedi are known as the Chedis of the four Kings and date back to the rule of King Rama I, (King Phra Buddha Yodfa Chulaloke – formerly known as Thong Duang), who established Bangkok as the capital of Thailand following the sacking of Ayuthaya by the Burmese.

The central of the three in-line chedis was built by Rama I to hold the Phra Si Sanphet Buddha image bought from Ayuthaya, while those on each side hold the ashes of King Rama II and King Rama III respectively.

“Wat Po/Pho” also houses a collection of sacred Buddhist scriptures. Inscribed on palm leaves, the scriptures are housed in an air conditioned monody behind the Chedis of the four kings, and not accessible to the public.

The ubosot, the building where traditionally monks perform religious rites, such as ordinations, is surrounded by a double ringed cloister housing almost 400 Buddhist images and intersected on each side by pavilions housing a Buddhist image set in different styles.

Around the base of the ubosot are 152 plaques depicting the Ramakien, Thailand’s national epic, recovered from the ravaged ruins of Ayuthaya by King Rama I.

It’s a great pity that people visit Wat Po just for the Reclining Buddha as those who take the time to explore the temple grounds and make their way to the ubosot find a magnificent alter topped by a golden Buddha image sitting under an umbrella shimmering with gold and crystals.

How to get to Wat Pho/Po, Bangkok
Take the Chao Phraya Express Boat to the Chang Pier (Tha Chang), walk through the market around the pier and out onto the plaza flanked by old shophouses. The rear wall of the Grand Palace is across the street on your left and Wat Po/Pho is on your right. Entry to the northern compound of Wat Po/Pho is Bt50 (About $US1.50).